All one wants underground

Some trips just have it all. This trip did. It started out as two ladies going for a quiet cup of coffee in a sophisticated country pub. Before the night was over, there would be episodes of epic mud, deep water, flying cavers, and hardcore tempting.

Dave had asked me to give Marina a ride, and we are both so punctual it isn't punctual anymore, so we had to kill some time. What better way to do that than to enjoy a cup of coffee. Very nice! Lots of men to gossip up on, as well. With surprising outcome! Marina was convinced I had a man here. She knew that, as I had spent the recent easter dinner enthusiastically talking to this man. And indeed I had spent quite some time talking to a gentleman of undeniable charm, though I was not aware of a deeper meaning of this. And there had been no other men near, so this must have been the one. And it was nobody other than our Hugh! I must be a cunning one, as his wife was sitting next to me, and she didn't complain... 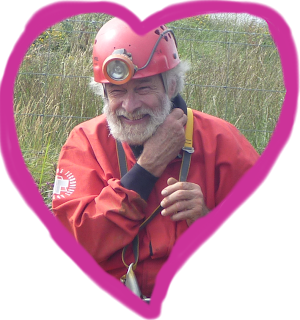 Hugh, apparently the man in my life.
But enough about men: we had a mine to mind. So we went to the meeting point, got geared up, and tried to follow Lionel down. It was a bit of a scramble, which is fun, and the mine was pretty all around! I decided to try to take pictures with 15 second shutter time, which was a success and which I will do more often, but which restricts you a bit. You need a place to put the camera down, and the others are supposed to stay away. 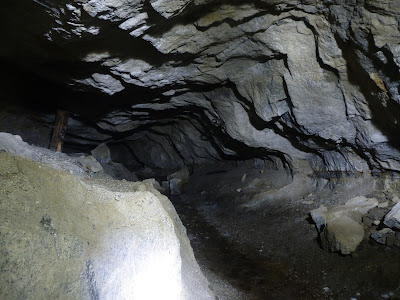 I should have realised before my camera has this possibility! And next time not forget my tripod.
One of the places where I had a try (though with only moderate success) was a flooded winze. Lionel got carried away, and spoke of crossing it. Crossing? There was hardly any room to stand on the other side. I asked what he possibly would want to do there. His rapid answer was that it was a good spot for extreme champagne drinking. I immediately agreed that that was a splendid idea, but that it would have to be done in style, and he would have to be wearing his tuxedo for that. His response was "well that can be arranged". I want it! I love a mine, I love a man in a tuxedo, would I manage to have both? And if an Englishman promises you something of that kind you can be fairly certain it's empty bluff, but Lionel's only half British... I'm going to try to make this happen! And from my side that would have to include an evening gown, and it will be interesting to make sure such would still look like an evening gown after getting there, but that is of later concern. 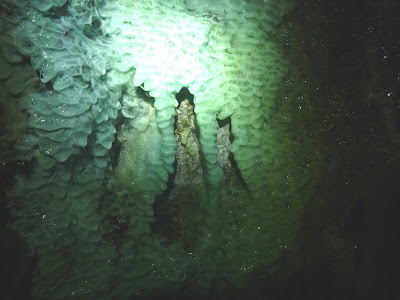 Nice-coloured flowstone never ceases to fascinate
Then we went into a tunnel so full of mud Rick would have been proud of us. One can only negotiate these in one way: a cartoonesque one. On the other side of the mud Lionel  found an interesting little climb. And my rule of thumb is: don't let Lionel have all the fun for himself! So knowing it was not the wisest thing to do I followed. And a scramble lead us back to above the very muddy part. Lionel started coming down, displaying polished climbing technique, until he slipped. And then it was 9.81m/s2 down. Into the mud! Luckily he landed well (though it would have been quite funny had he landed face-down), but I knew such a move would quite likely end in weeks on crutches for me. I announced going back the way I had come, but I hadn't reckoned with Lionel and Finbar, who gallantly helped my fragile body coming down in a more controlled manner. 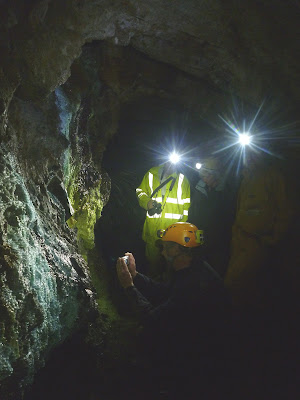 More people wanting to photograph the flowstone
By then we had lost the others, but that was anticipated and taken care of, so we went to the nearest exit, which had another treat for us (though not welcomed by us all): waist-deep water! And through the brambles we made our way back to the cars, where we met the others. And together we went to the pub for a pint, and for making lots of plans for more trips like this. Excellent! And would there one day be an extreme champagne drinking trip? Only time can tell...
Posted by Margot at 18:24

i thought he was called veijo :-)

Veijo is only my perfect husband! One could hardly claim he's in my life.

Now I understand the comments about Hugh the other day!

And I thought I had properly explained! So much for my communication skills.