Work as far as the eye can see

The first will be the last! Queen becomes maid. So far, if we had gone on fieldwork, it was often Durham university that was responsible. And with that responsibility comes the organisation, the paying, and the material handling. There's one thing Durham University always does in this project, and that's diatom analysis, and one thing University of Plymouth always does, and that's foraminifera analysis. But there's all sorts of things in addition to that we have to do with the material. Subsampling it for 14C analysis. Subsampling for ICPMS. Subsampling for the analysis the other university does. Doing grain size analysis. Loss on ignition. 210Pb dating. Tephrochronology, if applicable. Whatnot!
So far I'd gotten away lightly. So far only Iceland had been our responsibility, and for Iceland a lot of analyses had already been done within the framework of an earlier study. And if a site is Durham's responsibility I just get the foram sub-samples, and can leave the rest in Tasha's capable hands. But the USA field sites, which were the real deal, were ours. And us, that would be Roland and me, where Roland basically is for the funding and the inspiration, and I am for doing the work. So there it was. Tens of kilo's of mud. And countless many analyses, many of which unknown to me, to be performed on these. 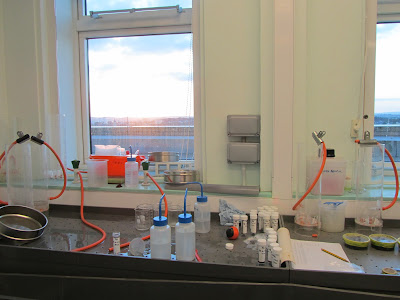 And it's not as if I have nothing to do. I have to do tephrochronology on the Iceland core (help!). I have most of the Scottish samples to count. I have counted the Isle of Wight core only on half the maximum resolution. I have loads of unfinished articles in the pipeline. I have to give presentations once in a while. But now I have the USA mud. And it's fun, but it's hectic, as well! And thus I ended spending what everybody thinks will have been the last beautiful day before the eternal rains of autumn start toiling in the lab. I could see the sun go down behind my sterilin tubes, sample splitters, wash-bottles, and sieves. But I got the sub-sampling done! And as I write this Tasha has received her samples. Not that she would be bored without them; her to do list is as long as mine. But the project now really is at full speed. And given a large enough amount of coffee this will keep me fired up, probably all the way to the end. Bring it on!
Posted by Margot at 16:16