Science and the general public

If you have a room full of scientists you have a big pile of taxpayers' money. Once every while we scientists wonder how we will somehow give the taxpayer something back, as the peer-reviewed articles we write won't reach them. The sea level conference had a panel discussion scheduled on exactly that. There were editors of peer-reviewed journals in it, the chief media dealings (his official title was somewhat different) of Durham University, and our national star Iain Stewart, who makes all kinds of popular science programs with the BBC, and so on. And they would lead the discussion on how we get our expensively wrought and highly relevant results to the general public. A topic discussed before! Think, as well, of the Large Hadron Rap, for instance.

The chairman started with a statement like the one I started here with (thanks for that one), and introduced the others and the way in which they had something to do with communication to the general public. And asked "are there people in the audience who keep a blog?", as this would be an uncovered area of possible science communication. My blog is not really about science (I do not get much response when I handle that topic), but it is a blog, and I raised my hand. Immediately I was ushered to the other side of the table, representing the blogosphere. How fast things can change. 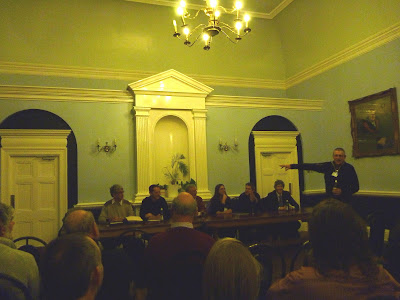 As I said, my blog appears fairly useless as a means of science communication, but I audaciously took the opportunity to vent some insights I had gained when trying to be a general nuisance to Dutch climate sceptics if they managed to get blatantly unfounded ideas published in newspapers.

Two chairs to my left Antony was solidly kicking the audience in the bum. Among other things he asked this room filled to the brim with sea level specialists: who of you has edited the wikipedia site on sea level change? No arms raised. None. We now all wonder if it was not us, then who the hell wrote these things. We are all overworked, and none of us gets any reward for public outreach, but we do have the moral obligation to share our dearly paid knowledge with whoever may be looking for it. And so many of these looking for information start right there. 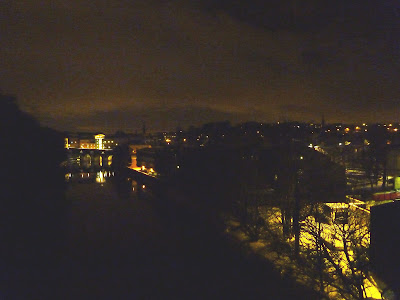 Picture taken on the way back home afterwards

A good point that was raised from the floor was that scientific journals have the power to demand laymen's summaries of all the articles they publish, and make these available online at no charge. As soon as it becomes obligatory it is quite easy to defend such activities to your boss. And we had two editors on the board, and at least one of these has committed himself to this. The other one I still have to ask at some coffee break. That really would be such an enormous step. Any science journalist can keep an eye on these things! And anybody else as well. maybe I'm being naive but I think that if this gets implemented that's a giant leap for mankind.

I have promised myself to summarise all I have published myself in words my metaphoric grandmother would understand, and post that on my blog. Maybe people will fall asleep. But I think I owe doing this to the Dutch, Norwegian and British taxpayers that have allowed me to fill up my brain with esoteric knowledge. And who knows, maybe these two cents are picked up by some passer-by...
Posted by Margot at 12:10

I think this is important. But we may also realize that reaching the public is not the same as making the public act!
But the best way to publish your enormous knowledge is actually what you are doing. Tell it in an everyday story and in a language your grand mother understands.
Everything I write is actually aimed for my old mother!

Well I'm not sure if I should try to take the gargantuan task of making people change their ways onto my shoulders... there's only 24 hours in a day after all. And I am a scientist! If I manage to make people better understand climate and what's going on with it, I'm satisfied. If they then decide we're going to hell anyway and buy a Hummer that's really their choice. People who are better at that sort of things perhaps step in there! Maybe the likes of you, Jesper?

Hey, good to meet you in Durham. Sorry I didn't see this post sooner!

I wrote something on this meeting too:
Science and the Media

Yes, good indeed! And keep up the god work. And you're linked; check the post "Margot's science outreach goes freestyle!"