Both! I guess.
Getting out of your quite 20th century car and getting onto a horse that, logistically speaking, is more of a medieval thing, might not only mean moving back in time, but perhaps also moving up on the social ladder. This is England, you know. Anyway. Fairly out of the blue one of the PhD students, Sally, asked me if I felt like coming along for a ride on the Moors. And yes I did! So today was going to be the day. Which started early; first I had to deliver my last century vehicle at the garage for MOT. Scary. I didn't think it would pass just like that. I hope it will pass without the necessary repairs and replacements costing more than 1.5 times the entire car. But I'll find out about that later. 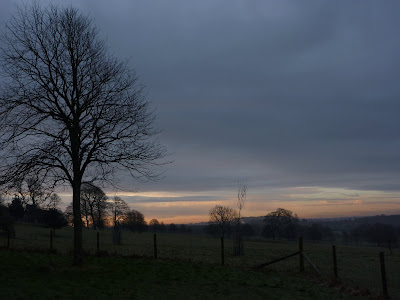 The view while biking back from te garage was not bad!

So in the crisp afternoon I got out of Sally's 21st century automobile, changed into riding trousers and -boots, filled in a detailed form (this is England, you know!), tried to borrow a helmet that was big enough, and eagerly awaited the horse they had picked for me. They showed up with a goodlooking, but lazy, 8 year old chap by the name of Burnfoot. They first wanted to see how skilled I was on horseback, so they let me ride around a bit. Burnfoot, a Higlander, has a nice gait, which is expected from that kind of big-bottomed stocky hairy-hoofed horse, but won't run a meter more than strictly necessary. Ah well. I somehow managed to remember how it was approximately done, and got approval! 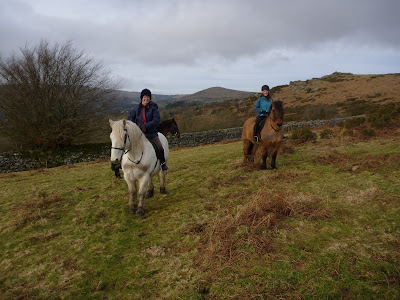 Left Sally and Callum, and to the right Burnfoot and me! Me on horseback,  sight that had not been seen in a while....

So off we went! Onto the amazing moors. Fairly calmly; I was used to racing away. Horses that are for rent tend to be quite eager to get out of the dusty indoor hall and out onto the fields. And on the Dutch sandy beaches, for instance, they can race away. Here the canters would not last longer than a few 100m at best, but I still had a blast. Lovely people, endearing horse, good weather (even though we got blown out of our riding clothes on the hilltops and crests), beautiful surroundings... not bad. Wanna go again! And I think they'll trust me with a slightly less sluggish horse next time. The only problem is that it would be nicest to go with Sally, but she always goes during the week, and Roland is not amused a the thought of me trotting off in the middle of a working day... we'll see!
Posted by Margot at 19:35

Tell this #&*@ Roland guy you're a scientist and are therefore not supposed to be restricted by such confining things like work hours. It might kill your intellectual creativity.