Since Durham nothing has been the same! Science communication is shadowing me. And some of it is a coincidence; last week I showed Neil my forams, which probably illustrated my geekiness more than it did the state of the art of climate science, but still, it was bringing science to a lay audience. Tuesday I got to see our local hero Iain Stewart on the TV for the first time, watching "How Earth Made Us". Brilliant! I'm fan. Not much climate, but lots of relevant geology. The guy has an amazing job. And I knew that; in my first week Roland and I bumped into him in the pub, and Roland introduced me, and within minutes he was telling me about having been in Tromso and on Svalbard just weeks before. But for this series he goes to places you really can't imagine.

Thursday I had lunch with a neuropsychologist (is that the correct term, TV-psycholoog?), who turned out to be massively interested in the climate debate. I think we'll have lunch more often. He sounded like I was the first climate scientist he'd bumped into in this town. 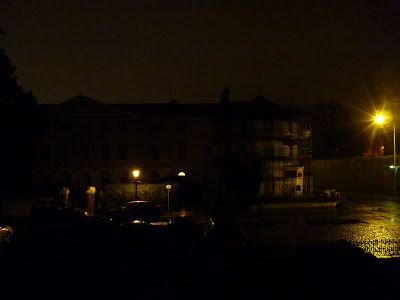 A completely unrelated thing that isn't the same anymore: my street got its streetlight back! It had been blown over in typical English autumn weather, but now we've got a replacement! A trifle, perhaps, but it's not easy coming up with nice decorative pictures for such theoretical postings...

And got two (2!) letters from my sister already! With lots of environmental pondering in them. It looked like I had a hand in getting her to contemplate such things. And a certain non-coincidence was Roland sending me a link to a much more scientific blog, by another Durham participant. Read it! No irrelevant bullshit about somebody's personal life. Just climate discussion. That bloke should have been on the panel instead of me.

And on wednesday (when I initially would have lunch with the psychologist, but I shoved him to the day after) there was a talk about ocean acidification. Interesting! And the lady managed to bring it well. And then I wondered if I should perhaps say something about it on the blog. I've never worked on it myself, but still, I would probably know much more about it than the average lexicologist, psychologist, or lawyer, just to name some professions. And the words of Antony and Iain, spoken during that fateful discussion in Durham, rang in my head. If lay people want to know something that's not your specialism, answer them anyway! You're a climate scientist, what they get from you is better than what they get from most. Nobody will have the patience to be redirected to the real expert, and beside that, the real expert may not have time or be willing to answer. So I should not hesitate to speak of ocean acidification! And I am aware that nobody asked anything about it, but that may just be due to unfamiliarity with the topic. Let’s do something about that!

One tiny matter is that I managed to already produce a tonne of text without even starting. I think I'll turn that into a separate blogpost, and having written this will haunt me until I've delivered! Stay tuned!
Posted by Margot at 14:04