I had been thinking of spending new year's even on the Moors. A beautiful place to do that! And the weather would be benign. I hadn't be feeling to well lately though, mainly due to not sleeping so well, so when I got an invitation from Jessie to celebrate it at her place I gladly accepted.

There was going to be Indian food, so first I went to the supermarket, bought spices and herbs, and hardly any other ingredients, and tried to make these into a proper dahl. And then I set off.

I had already heard she lives in a nice area in a nice house, but she does indeed! It happened to also be her mum's birthday, so there were about half the world population in relatives present, of which I soon gave up trying to remember the names. I had already heard that both her family and her fiance's were a bunch of characters, so it would be good. Still I was glad that also Louise from geography was there.

It started with smalltalk, food, and Adam making Margarita's. At 11 I could start wishing people a happy new year by text message: Norway and the Netherlands were already there! I forgot a bit that my Tromso friends tend to only have my Norwegian number, so I may have to send some explanation texts after the initial ones, but some managed to guess that it was me. 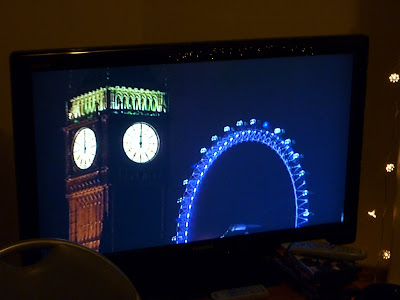 Between 11 and 12 we started a game. It was doomed from the beginning. At midnight everybody would abandon it. But it was fun! After 15 minutes of arguing we had teams for playing "cranium"; a sort of mixture between charades (hints), pictionary, trivial pursuit, and whistling songs others have to identify (there's no independent game of that as far as I know). It was cool! But then midnight approached. The TV showed us when it hit, and then we went out, saw fireworks, wished each other happy new year, and quite soon went back in again, as it was fairly cold. 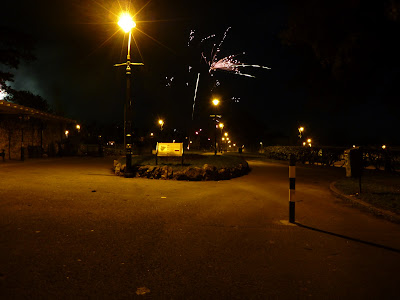 Back in, it had become quieter and a bit more intimate.Even the cat dared mingle around that time, something I enjoyed greatly. As the only foreigner I received some of the praise the Dutch generally get regarding their language skills when confronted with those with a world language as a mother tongue, and Lou got some unsettling remarks from people who claimed she sounded as un-English as me. Does she? Anyway, around the cranium-board things got geeky: even though in the game we had not encountered this, you can get the task of molding something from putty, while your team members must guess what it is. And we micropalaeontologists of course started making foraminifera, diatoms, and pollen for each other. With success! We have no reputation to lose, anyway.

Bed called, however, and I freed myself from microfossil putty, friendly people, and the charmingly drooling cat, and went home, underneath the full moon. It would have been beautiful on the Moors! But this was the better idea. Happy new year, everybody!
Posted by Margot at 10:52