The other CO2 problem

CO2 is a greenhouse gas. But not only that! It's the fizz in your soda as well. Leave a bottle of coke behind the window on a summer day and you may just find yourself in the position to be confronted with the fact that the coke degasses. Messily, sometimes.

The ocean is one big fizzy drink as well. There's an equilibrium with how much CO2 you have in the atmosphere, and how much in ocean water. Good riddance, perhaps? The oceans as massive carbon sink? Some people say that if you could just stir the oceans a bit faster you'd have dealt with so much of the CO2 problem. Just toss it in the deep sea. And you need the stirring, as it now takes about 1000 years to mix the whole lot, and we're exhausting so much on so much smaller time scales.

But is it gone when it's under water? Of course not. And not only because the greenhouse effect warms up the oceans, which diminishes their uptake capacity of CO2. Also because it does not stop affecting us when it’s out of sight.

If you dissolve more CO2 in water it becomes more acidic. Acids dissolve calcium carbonate, and there's lots of that in the oceans. Think plankton. Think corals. The situation would be that at the surface, the oceans were supersaturated with respect to calcite, which means that if you were a little planktic creature you could just make a calcite skeleton. No probs . If you would go deeper and deeper the pressure would at some point get so high that this was no longer the case, and calcium carbonate dissolves. In the deep sea, the sediments at the sea bottom tend to be white; just dead plankton. But not where the sea is too deep: there it would be red or brown or black; just clay and dust and other non-organic crap. How deep would be depending on things like the age of prevailing water, and the temperature of it. 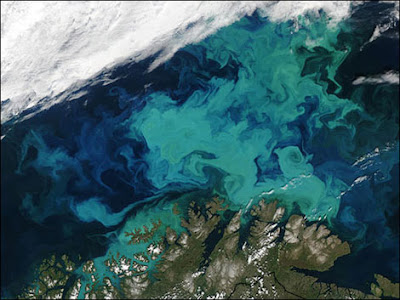 Lots of califying plankton. A part of this will end up on the sea floor. Picture taken from: http://www.panda.org/what_we_do/where_we_work/arctic/what_we_do/marine/barents/biodiversity/plankton/3D1I7SKPB_en%26um%3D1


Drill a core at a strategic place in the deep sea, and you'll see white sediment for meters and meters. And then, suddenly: bam! Red. Which after a few decimeter fades back to white. What happened? For some reason we're not yet entirely sure of, climate went kabloing 55 million years ago. Probably gas hydrates played a role in it. It got hot! High CO2 levels! Much higher than now! And, of course, a mass extinction. Climate skeptics sometimes say that climate has behaved wilder than it does now. And they are right. 55 million years ago is a good example. And true, life recovered from it. Still I don’t see that as a reason to invoke a mass extinction event ourselves.

Ocean acidification in the fossil record. Notice the picture is taken from the top of the core sections. Picture taken from: www.es.ucsc.edu/~jzachos/projects.html

Anyways. The sediments abruptly turning red was caused by ocean acidification. About 50% of benthic foraminifera (these critters I study, and then specifically those living on the sea floor) got extinct. And that event took at least 10.000 years to kick in. Countless many generations of any life form. Plenty of time to adapt, you'd think. Evidently not.

I already spoke of atmospheric CO2 levels being much higher now than in the previous millions of years. For about 1 million we just know because of air bubbles trapped in Antarctic ice. For going back you need indirect measures. And for this specific topic, ocean acidification, we have, amongst other things, boron isotopes. The data is not rock hard, but so far it looks like for the last 25 million years the oceanic pH levels have not been beyond what they have been since we've had the glacial cycle. So what we're doing now is way beyond anything most marine life forms have ever seen before.

The depth at which calcium carbonate dissolves is creeping up; in the North Pacific, for example, a 150 m rise had already been found in 1981. I have to mention as well that this is much; in most areas it is not as bad as that. And at the surface any organism that so desires can still calcify away, but with pH levels dropping it's not as easy as it was. Plankton skeletons are increasingly light, and increasingly often deformed.

I found a great picture of affected algae, but I think they're copyrighted. Look for yourself:
http://www.ozcoasts.org.au/indicators/images/oze_fs_004_04.jpg

And this is my cue to stop talking about plankton. If you want people to care you have to come up with something sexy! And here it comes. Corals are extra sensitive to ocean acidity. There’s two common types of calcium carbonate: calcite and aragonite, and the latter is 50% more soluble than the first. Corals are aragonitic. They are in trouble as it is, but it could be worse. Acidify the oceans simply by pumping the atmosphere full of CO2, or even on purpose to undo just that, and the corals are the first to go. And corals are not fluffy and don't have large moist eyes, but they are generally considered beautiful. And we in the rich west love to go diving. And preferably in areas where there's more to see under the water than sand. What is most popular? Of course. Coral reefs.

Another sexy thing is money. With higher acidity species like mussels and oysters have difficulty growing. At fairly reasonable CO2 levels you already get a 25% or 10%, respectively, growth reduction. And there are acid resistant species that will take over where the original species disappear, but that process tends not to lead to interesting ecosystems. We all know the stinging nettle forests that often pop up where man has been rooting around. 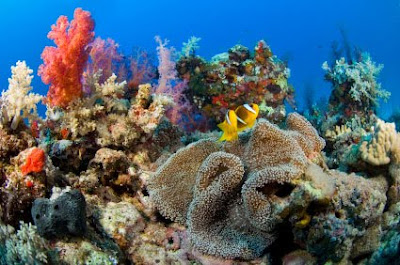 And not only that. get rid of calcifying plankton, and you've ripped a large part of the base out from underneath the marine food chain. No more fish! No more whales and cute playful dolphins. Nobody wants that.

Since the glacial cycle, CO2 levels have roughly varied between 180 ppm in ice ages to 280 in interglacials. A transition between the two takes about 10.000 years. Now we've kicked it up to 385 in 100 years. And don’t assume that means we’ll need another 100 years to reach 490; the rise accelerates. In the last 10 years we’ve seen a ~20 ppm increase. And we don’t know how fast this will go… everybody knows inhabitants of countries like India and China can’t wait to go exhaust as much as we do.

And we’re still talking timescales of decades; many life cycles of dumb algae and rigid corals, but would it be enough? Modelling indicates that with any reasonable scenario, you’ll lose all aragonite in the Southern Ocean by 2100. Losing all calcification on that timescale is not very plausible. But if we keep on accelerating pollution, and not even unrealistically fast, we’ll have managed even that in only 200 years more. We will be forgotten by that time if it would come to that.

But as I said, corals are more vulnerable. In the last 16 years, a 20% growth drop has already taken place. If you just count acidity, you’d have a 40% reduction with atmospheric CO2 levels of 560ppm. But this won’t come alone; if you take the concomitant temperature rise in consideration, and such factors, you probably lose them already at 450-500 ppm. And I think I’ll live to see that! Ocean acidification, coming to a sea near YOU!
Posted by Margot at 18:44

I actually thought it would be worse than this. But as it is, it already is scary, indeed...

Hey Margot!
In my summer-vacation, I visited a museum of natural history. They had a timeline with the average global temperature there. What struck me, was that during the last 4 billion years, the temperature has been considerabely higher than now during at least 3.95 billion years of that... And I'm talking an avarage temperature of 32-35C, whereas it's about 23C now. Would you care to comment on that? (Were they plain wrong?...)

Adding to my confusion is the fact that prof. Salle Kroonenberg (Delft professor) was on the breakfast news on TV a couple of weeks ago, stating that no scientist has enough knowledge to make any credible claim about climate change anyway. Talking about something when you least expect it...

Rest assured, the above two examples are not enough to stop me being very, very worried!

Well, now you enter timescales I'm not too good at. Climate definitely has been much much warmer than today; in the Cretaceous, for example. I'm not sure how much of the time that has been the case over 4 billion years (that's lots!). It may be right, but what would that really matter to us? As I said, only 55 million years ago it was much warmer than today, but how is that a relief?

And well I'm not at all convinced of Kroonenberg. I read his book, and he has some reasonable ideas, such as that it's a better idea to adapt than to try to mitigate; fair enough, you can prefer that. But his climatological foundation is as strong as a wet newsaper. Look at his bibliography; he seems to know an awful lot about the level of the Caspian Sea, and of Surinam gneisses, but at least at the time that he wrote that book (dMM) he evidently did not know enough about climate. And it didn't stop him from raising his voice in any spotlight he could find. I don't believe a word he says until he backs it up with solid references to solid research.

(I re-posted this in order to correct an ugly typo)

For all your MERIS algae maps please visit www.waterqualitymap.eu/marcoast ;-)
... sorry, this opportunity for self-advertisement was just too easy.

This was a very interesting article. Thanks for posting it.