If one entertains guests who have dashed around more than 100 degrees latitude with little rest one gets time to read about English history while they sleep soundly on a pile of sheep skins. In an, unexpectedly, sunbathed living room! Since my return to Plymouth the weather had consistently been complete crap. Not anymore!

After another lazy breakfast we set out to see town. A first stop was the waterfront. It was not raining anymore, but the wind was strong, which led to the waves breaking on the shore in a way one could look at for hours. We also tried to visit the lighthouse (it was closed), and wandered over the Hoe, and did all these tourist things, which felt extra touristic as it was holidayesque weather and we were talking Norwegian, which made me feel like a real tourist too. Bring out the cameras! It was really nice. 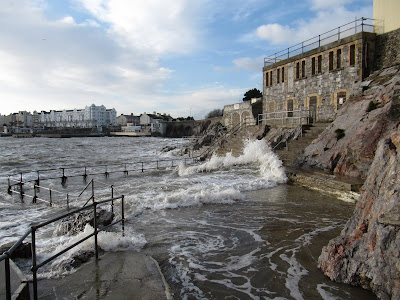 One never manages to catch the really spectacular waves on camera. But they can be imagined!

Being in England we of course had to have tea somewhere. We found a lovely venue, with grandmotherly dishware and lots of royalty on the walls. Excellent! I also had been looking for a good opportunity to see the ruined church at Charles Cross. It was bombed in WWII, and left that way, a bit like the Gedächtniskirche. Its standing in the middle of a very busy roundabout, so it takes some speed and comtempt for death to get there, but then you get a good undisturbed look. A strange ruin; the church is only a few hundred years old, but it was built to look old from the beginning... anyway, we made it across without accidents, and also back. 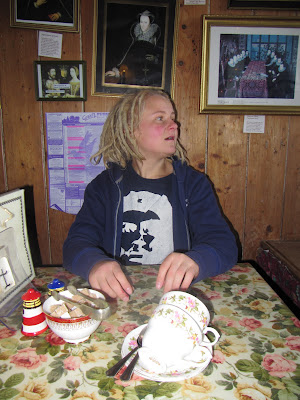 Flowery table cloths, flowery cups, Mary Queen of Scots, and a good friend. What more could one want!

I showed Sanja the campus too, where we could conveniently check train time tables. Then we should eat before we would go to the Barbican Theatre, and we settled for a seafrnt pub. I looked forward to the theare! We cued up with the other expectant visitors. I saw many people with different tickets tough. And the theatre is not that big. Furthermor our tickets said "level minus two", while were wer standing at stairs going up. I decided to ask a theatre employee. He looked at my ticket as if it was in Chinese. And then asked me "are you aware that there are two Barbican theatres in England? And the other one is in London..." I felt so stupid! I had just googled "Barbican Theatre" and ordered tickets online... and that had gone embarrasingly wrong... no culture this time! 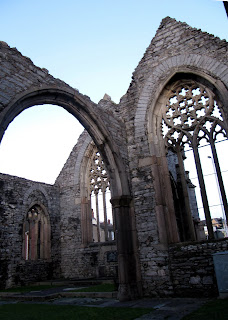 We decided to go have a gin in the distillery (it's a real nice building! Guests would logically want to go there), and there having a look at what movies would be shown in the Arts Centre. But we were refused at the door... we were not members (that probably only matters on a saturday) and we were not properly dressed, the bouncer said. We had to be "casual" (I thought I was!) and not dressed like (dramatic pause) ... _this_ (very significant intonation). This was going all wrong! By then we had forgotten the possibility of a movie, and went to Mount Batten, simply because it's fun to take the water taxi. And then, after some cider, bacjk the same way, and then home, where we enjoyed some last questionable Portuguese booze before retiring again.

The next day I brought Sanja to the railway station, and that marked the end of my first weekend with guests in Plymouth. None of it went as expected! But with such guests the expected never happens. Maybe that's half the charm. And my longing for Norway has been cruelly rekindled again, but that may be just a good incentive to soon go there, and not something that should make my life here less pleasant. Anyway. They have both left, the blog is updated, I should go home and get organised again! My bag is still standing where I put it after the Isle of Wight fieldwork, my fridge is full of dubious substances that have been residing there already since before that trip, and I urgently have to do laundry... get my life back in disciplined order again! But with some fresh good memories to chew on...

Sounds great! And having guests must be a good way to make you feel at home yourself.