I'm a grown-up. I must be. When I found out I was not welcome at the students' sport clubs and found solace in the, well, grown-up clubs, I found out quickly that they actually require you to be one. The kayak club expects you to be able to transport your own kayak, something that might prove something of a challenge with only a bicycle, and the caving club expects you to be able to get to these caves independently. And in theory it should not be so difficult to hitch a ride, but unfortunately (in this aspect at least) the members live all over the place, so there might well be trips with only people from neighbouring villages showing up. And the trip tomorrow is near a village to which a bus does go, but none goes back at the estimated time of emerging from an abandoned mine... Hmm. I'm feeling the pressure!

And what does one do with such pressure? Give in to it. I should have a car anyway in order not to lose my skills. Or rather, to improve them. So I started browsing internet for nice second hand cars. These are so cheap here! I saw a nice Rover for £500 advertised. It had already been sold, but I had the seller on the phone, and he has more of these. I'll go and have a look soon... and that feels like last winter, when I went looking for cars as well (well, only one, really)... exciting! 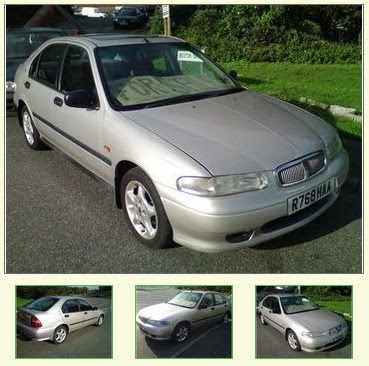 Rover by the way has ceased to exist, which is a disadvantage, but I am a sucker for their demise, their Englishness, and the drakkar logo. So I'll start there. Last weekend I already started finding things out about parking permits and car insurance...
Tomorrow I either have my postponed caving debut, or if nobody from Plymouth goes there, I have the night off... and if I do, I might as well swap, work in the evening, and take the afternoon off for going to this Rover dealer... stay tuned for new developments!
.......
News update: it's crap weather here. I don't feel like biking to the other side of Plymouth to have a look! I have a date with the guy tomorrow morning. And for those who are worried: he's not a Rover dealer, he just deals whatever. He spoke also of a Ford and a Peugeot. Promising!
Posted by Margot at 18:32

Been reading your blog for a while now - nice to see a bit of England :-). I wouldn't one of those bits of England though - my mum had one and it was spectacularly terrible - probably one of the reason Rover went bust. What about a nice MG? I'm sure the dreadlocks are wind-proof?

Didn't know you were reading it! Nice to find out. Must be interesting to read that from the opposite perspective.
What was the problem with that Rover? Or was everything about it crap?
Hope all is well with you up north!

Oh it was just poorly made; the doors didn't fit nicely etc. And the technology was very old - they kept changing the shape of the bodywork but didn't really change the car. But that was a brand new one and you probably have quite different expectations when you buy a banger for £500. I guess you could think of it as a bit of history.

I'm in Southampton at the moment but should be back in Tromso next week.

Everybody is against Rover! I must admit, it is a tad suspicious that they always seem to be so much cheaper than other brands. I think I have been convinced. Some non-Rover, here I come!

And Southampton? I'll wave in your general direction! Friday I drive sort of past, on my way to our Isle of Wight fieldwork...

Rover... You know my first car (actually, it was quite a wreck already) was an Austin Metro (and, after Austin ceased to exist, continued as a Rover 116). I recall telling you it hardly ever ran. So, for goodness sake, don't buy a Rover, unless you like the idea of owning a car that just doesn't run.
Perhaps you should go looking for a Robin Reliant if you're after a reasonably priced British motoring icon?