If you do, people will still be celebrating it 400 years later. Strangely enough. And though it was the night before our fieldwork I decided to experience some of this strange English folklore.

On Halloween day I already noticed that you can buy fireworks everywhere. In October! New year's eve is still far away. How silly of me. They sell it for, as they call it, bonfire night! Which is a rather descriptive term that releases little information pertaining to the background of the celebrations. But soon it dawned on me that the Brits referred to what I was taught in English lessons at school to call Guy Fawkes Day. Burning the Guy!

And it's big  here! Some people wanted to go to Ottery St. Mary, where nutters seem to feel the urge to carry burning barrels of tar around on this specific evening, but that was too ambitious. We decided to watch fireworks on the Hoe, the fields on the waterfront, which for this occasion were adorned with a fancy fair as well. 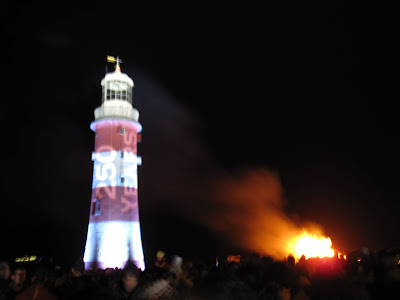 By coincidence the lighthouse had its birthday around this time

With something like 8 serious scientists we strided around. In serious contemplation of the value of democracy? No, don't be silly! Seeking cheap thrills. Rob had his eye on a specific one. Dodgems! Having no idea what he was talking about I followed. And for the Dutch: it turned out he was talking about botsautootjes! Gaaf! Of course I joined. I was a bit disappointed that the guy who metaphorically had "dodgem" tattood on hir forehead, by merit of being a professor in transport geography, did not join. But it was fun! And man had that been a while ago, me in botsautootjes.

After this episode it was time for the bonfire, and for the fireworks. Nice! And I assume one ought to traditionally fill oneself up with beer afterwards, but that is where my involvement with English folklore ended: the day after I had to be sharp. I had gotten a taste, anyway! 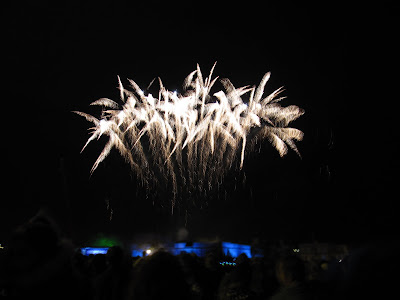