Caving can't always be a walk in the park like last week. It's not all about sophisticatedly conversing while leasurely sauntering in the general direction of a pint-sized mine, dug in such a way that those with some crouching talent can walk all the way in, while the waste products of Mother Earth cling to nothing other than boots and gaiters. No! One has not properly started caving until the stage of sliding, crawling, sloshing, and climbing has been reached! And my second trip in the worthy company of the Plymouth Caving Group offered just that.

Our goal was the Pridhamsleigh drip stone cave, very close to Kingswood, where we had been the week before. This time I got a lift from Neil, an equally new participant of PCG trips as me, and, as it happens, a lawyer specialised in litigation, and a reader of the blog. Evidently I have nothing but good to mention on the topic of this distinguished gentleman. We arrived in good time at the designated place, which was as adorned with gale-battered, and this time also rain-swept, trees outlined against a dark English sky as last week. I wrestled myself into my brand new, squeaky clean caving outfit, consisting of waders up to my armpits, and a new waterproof jacket (the old one was in repair due to a defect zip, something the Iceland Snieuwhoppers may have foreseen). I was confident the strong smell of new rubber and gore-tex would not linger around me for long. And indeed! The waders are not made of breatheable material (I am fairly certain that's the term that's used; it sounds, however, profoundly wrong... "breathing" does too. Unidirectionally water-permeable?), so the sole reaching of the cave entrance already resulted in competing odours. And there the real fun could start! 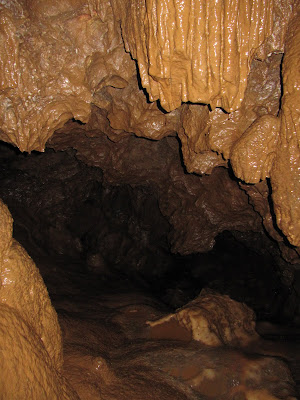 The cave is a well-known, well-visited dripstone cave, which means no stalactite has remained intact, but its defaced beauty was still impressive to my not yet spoiled eye. In we went! It's clear the dazzlingly many tunnels and rooms are well-travelled, but this does not mean they are necessarily easy to negotiate. Thanks to my modest size I could get quite far with crouching and crawling. Not fast enough, though; at one point I lost track of the people before me, and just assumed something pertaining to the route they would have followed. Of course I guessed wrong. Dangerously I was the second last person in line, with only Neil behind me. It may not be in lawyers' natures to go around assuming away without verification, something about which I may want to shroud myself in tactical silence regarding to what extent that trait is found in micropalaeontologists; anyway, he found the group back in no time. 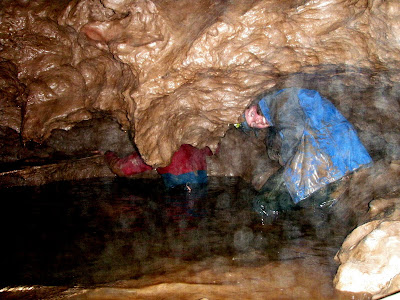 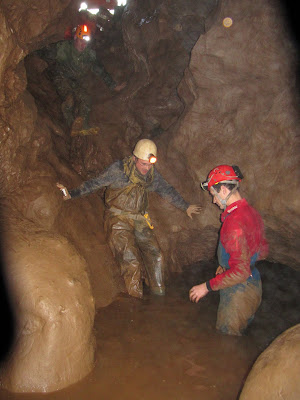 I got used to this fairly unfamiliar terrain soon. It's good to get so close to geology! And in some places where the wet, slippery surfaces were steep, my rock climbing abilities, albeit limited, came in handy as well. And this time the caving got stereotypical: there was ample sliding on your belly, headfirst wrestling through narrow openings, gooing on your back through the mud... I liked it! 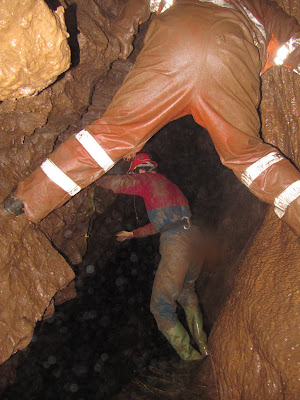 I was quite happy with my waders, which proved their merit as many rooms in this cave are partially flooded. I was sure my jacket would not be recogniseable as brand new after this trip! And at some point my headlight slid off my helmet, right into thigh deep water, but it was chivalrously retrieved by Richard, the leader of this trip, and it fortunately did not stop radiating light. 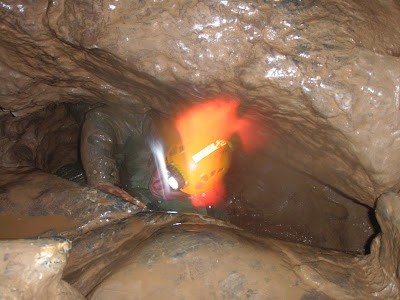 The atmosphere among the cavers is rather unusual, by the way. Now it's autumn we gather in the dark, maybe exchange names, and then go. You end up in the bowels of the earth, crawling on your belly in the mud, with people you hardly know the names of, and hardly have seen the faces of; most of the time everybody has his (I was again the only female) headlamp on, as these tend to be blinding. But all takes place in some relaxed atmosphere that does not indicate anything unusual. And the PCG contains people of all kinds of walks of life, with a penchant for going underground as the only common denominator. 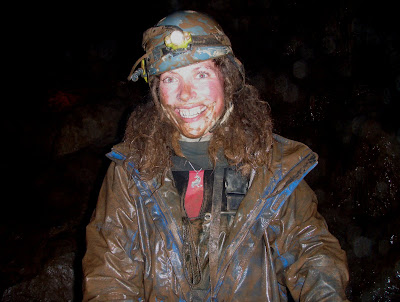 By the time we all looked remarkably similar it was time to go back. The air got fresher, and soon we were standing outside again. The rain seemed to helpfully try to restore us to our original colours, but that was fairly in vain. In the dark I got back into my quick dry pants and soldiers' boots, and thought that rendered me very presentable. The light in the car, though, already informed me that that was a fairly optimistic assumption. And coming home, and coming across a mirror, I burst out laughing. I had figured I would have some mud smudging on my face, but the troglodyte face that leered at me was a bit beyond my expectations. I had gotten really close with geology! And I can't wait to go again! 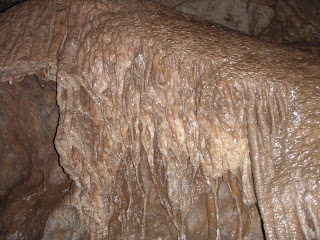