What does a Dutchman think when contemplating Halloween? American stuff. Brought to Europe by those who can earn money with it, but not really catching on. How could I be so mistaken!


Lauren, who had moved to Exeter, had invited her Plymouth friends to a Halloween party. And we came. Three of us ould meet at the railway station. On the way I already saw lots of dressed up people. On the platform we chatted with a wandering vampire. And walking to Laurens house we really hardly saw any people who were not in costume.

Brits will be Brits, though, and the vast majority of female partygoers had done what British girls on a night out are famous for: dressing up in as little as possible. Except for the heels, where "higher is better" seems to be the motive. To such an extent that it struck the Brits themselves as well: Jessie and Adam, with whom I was walking, and who by sheer coincidence are quite British themselves, also wondered why all ready-made halloween costumes for girls basically all are prostitute's outfits. And the not ready-made ones quite regularly turn out that way as well.
Reaching our destination I gave Lauren, who tonight looked like a garden gnome, a hug and disappeared into her bedroom to change into my costume. Those who have known me for a while will recognise the dress... when Halloween was coming up I for some reason or another thought of Erwin Olaf's portrayal of Sisi, the Austrian Empress, with the fatal file still stuck in her chest. And that idea stuck with me, so I had decided to impersonate this famous character. Famous in the Germanic countries, that is, but I only realised that later. 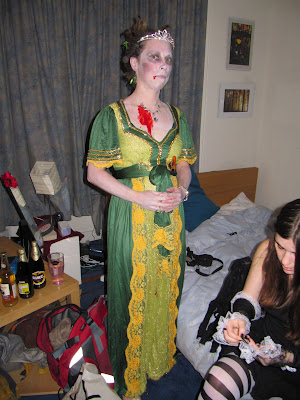 There she is, the deceased monarch. Notice the handle of the bloody file, tucked away in the sash of the dress. In the corner a black fairy is finishing her attire 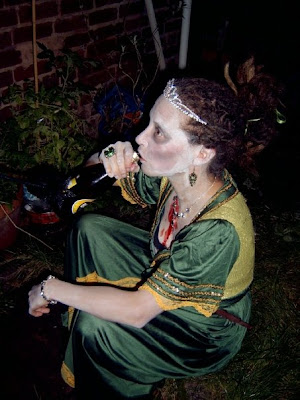 I wasn't being very regal all of the time...
Nobody had heard of my character, but I knew I would not be alone in that: Till had decided to show up as Emiliano Zapata (see group pic). Perhaps the only even less known personification on the party...

And then the party could start! I did not dare drink more than a minimal amount due to having been ill so recently, and the Plymouthians and the Exeterians did not blend that well, so the party was not that wild, especially for me, but it was fun anyway. How often does one get a chance to chat up with Julius Caesar, Death himself, a Tyrannosaurus Rex (That I impolitely mistook for Godzilla), a green mutant English football player with a screw through his neck, and Hulk Hogan. And of course a social night with the other Plymouthers, and Lauren, was good! 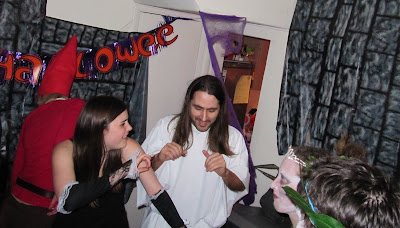 The garden gnome and the black fairy were very keen on dancing, something that took a bit of adaptation for me; I felt really regal with all the kitchy bling. But after a bit of solemnly waltzing around I got into the party spirit and danced away in a manner slightly more befitting the choice of music with everybody else. 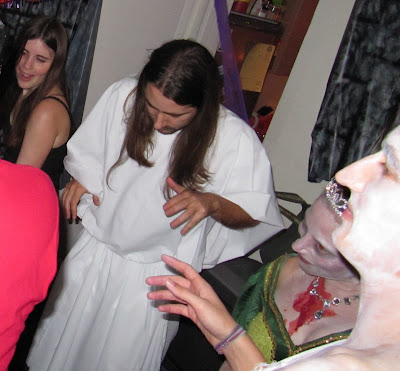 And even though this party, like many, had its instances of people feeling a bit outplaced, left out, drunk, upset, insulted by unsolicited amourous initiatives, or slightly put off by the police appearing at the door in connection with neighbours complaining about noise, it was a fun, bouncy party! 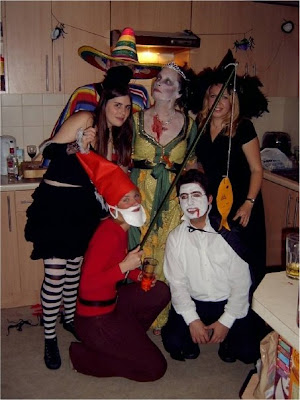 The whole plymouth geographical group (the pirate who took the picture was from Plymouth, but not a geographer)
The Plymouthers took a cab home. Unexpectedly, the trip was dominated by political discussions... not very halloween. But for us it was over. We thought.

It was agreed on that the taxi driver would take us to the library, across the street form the university. By coincidence a street both with many pubs, and also with lots of traffic by people moving to or from other pubs. It was packed! I got to my bike undisturbed by all the witches and zombies, and headed home.

On the way, unfortunately, one guy managed to lower my esteem of the peace and quiet of the partying mass. I overtook a running guy; something I did not think anything specific of. He did, though. Behind me I heard "That f#cking hippie is trying to outcycle me! Take her down! Take her down!". Peculiar. But hearing that I indeed willfully outcycled him and got home. Maybe I should have reproached him for striking such a tone to a late monarch... if things got out of hand I would still have my file. But death brings resignation, and the monarch chose instead to take a quick shower to wash off the paint and the blood. And retire, after my first real Halloween! 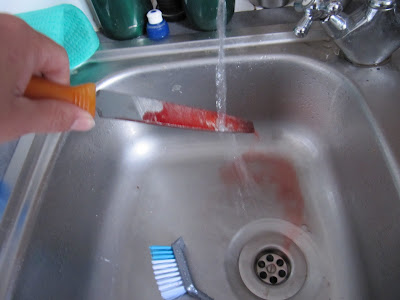 The day after sees such chores as washing the blood from the fatal file...
Posted by Margot at 16:29