Picture strange people in unusual outfits post-apocalyptically staggering through a dark, howling forest, with the sole aim of sloshing through the sickly orange muds of an abandoned uranium mine. A bit more radioactive than swamp science, but apart from that, quite the same, really!

This time it was actually going to happen. My caving debut! The first possible occasion I had that stomach bug, the next time it was cancelled, the third time I was on fieldwork... but this time it all came together. Dave, the chairman of the group, picked me up, also gathered another caver named Dave, and off we went to the meeting point near Buckfastleigh. We found a bunch of impatient types, many of them already clad in very credible waterproofs! And these lead the way to the start of the path. I got out of the car, and realised immediately that this was a good way of spending a tuesday evening. The night was mild of temperature, but fierce of wind, something to which the high pines paid tribute. Around me unfolded a scene of stripping males: many cavers appear to prefer to change on the spot. Understandably, when you think of it. I was advised to leave my bag in the car: it was going to be a short trip. Half an hour walk in, short while in the cave, 45 minutes back (uphill, this time). So we set off! 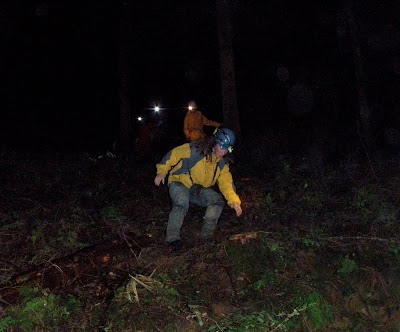 It was a nice walk through the dark forest. But it turned somewhat absurd when Chris, the organiser, at some random point suddenly looked down from the path onto an infathomable and steep slope, and said: it's here! Just down this slope, over the stream, and you're there! That proved somewhat more complicated than it sounded. We clambered down, many of us on wellies that are not well-adapted to steep slopes in wet November forests, negotiated the stream, got lost, were repeatedly placed somewhere while Chris, who seems to make this trip alone in the dark more often, went out scouting. Only one more vertical slope, and lo! The mine. 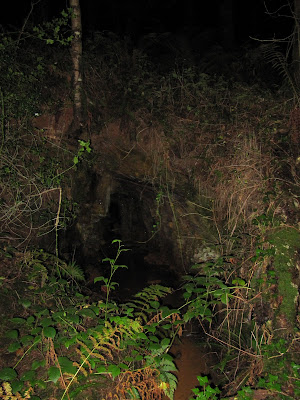 The inconspicuous and innocent entrance
One should expect the careful Brits to have gated and locked a uranium mine... it was known that radon had been accumulating in it. But it was just a gaping hole in the slope face, inviting any unsuspecting passer-by in! We did not let that invitation unanswered. And it felt like work, wading through mud in a humid environment. Luckily I like my job. 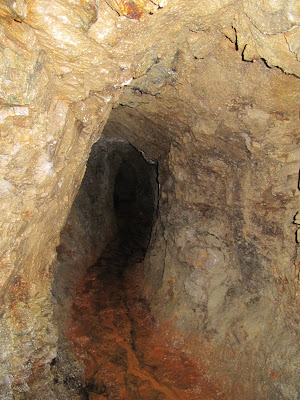 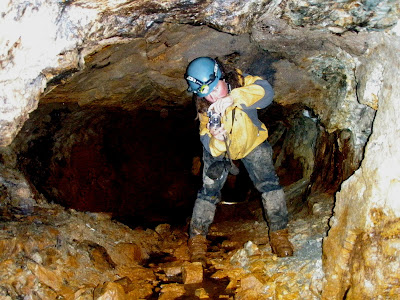 Notice the nice statigraphy of my clothes; the lower 15 cm is cave sediments, overlain by half a meter of salt marsh mud... 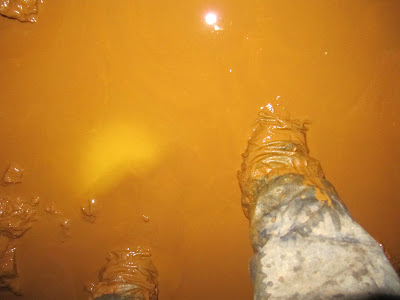 It was a very small mine, penetrating only a few tens of metres into the rock, but it was a beauty. The unusual mineralogy of the area had resulted in strange colours and patterns. All around the cameras came out! The actual mineral the mine was about was pitchblende. Nerds will recognise that as the mineral that enabled Marie Curie to discover radioactivity. And it's black, but we found amazing shades of green, yellow and orange too. 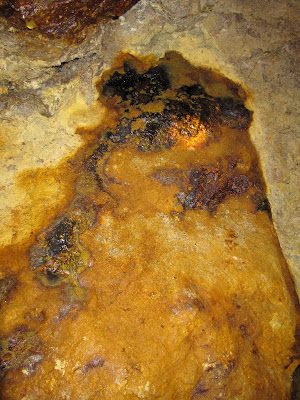 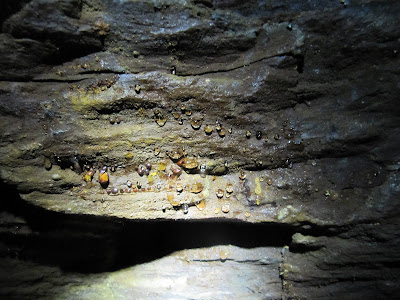 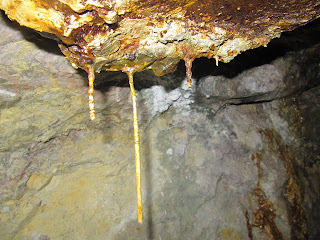 The mine being small, and not very healthy, we left soon. The geiger counter did record some elevated levels at a pile of mine waste, but nothing worrying on us. It had been a lovely debut! Now we only had to get back to the cars. Something that was not easy on all of us: Dave was somewhat out of shape, which shows itself on these slopes that we now had to stagger up, and chairman Dave (Cave Dave, in my phone), who had been troubled by a neck injury for months, had stepped into an unseen hole in the mine, which had made things worse. He had to do quite some stretching on the road to make it back. But we all made it, and five of us even into a nearby inn, for some evaluative chatting. And then a shower and bed! 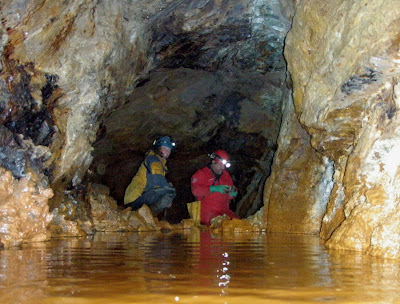 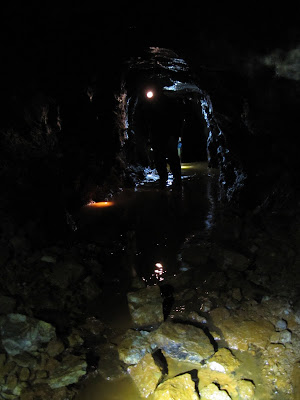 Many of the guys (I was the only girl) have such strong headlights you don't need to use your flash... 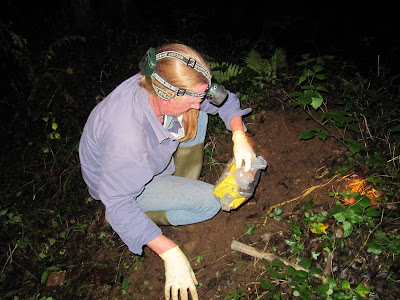 Chris looks for Pitchblende, helped by a geiger counter, outside the mine
I think I'll have a great time with this group! In the inn I handed over a subscription form and a cheque. It's official, I'm a caver now!