People who don’t say what they mean are hopeless, and to blame for most communication issues in the world. Blunt honesty is the answer! And talking right through people is a nasty habit and the only right thing to do is letting people finish.
Sounds reasonable, doesn’t it? Almost, anyway. Unfortunately, life is never that straightforward. I swapped books with Sanja when she was here, and one of the books I got was a book about conversation style. It sounded interesting! I finished it before the weekend was over. And it looks very dubious, but it’s worth the while.

What does the author discuss? Basically, interpersonal styles in talking. Sometimes as basic as that different cultures (and that can easily be regional) have different subconscious concepts on how long a pause has to be in order to signal that the speaker is finished. Put two people together that have different (and equally valid) ideas on that, and you’re almost certain that one finds the other impolite and the other finds the one timid, and they won’t get along. Or that some people make, and expect, regular “mmm”-sounds and the likes, to indicate that they are listening, and that there are people who produce, and expect, silence as a same indication, and other people assume “mmm”-sounds signal agreement. Needless to say that can go wrong too if you combine such different people. 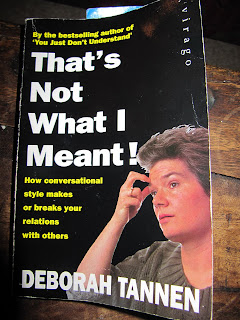 A more fundamental thing was that she also discussed information in the content of the words, and information in everything else. And the context. And whatnot. There were transcripts of discussions in it, between one person communicating by words and the other by everything else. And they refused to see the other side. So frustrating! But so recognisable! In a certain sense, I understand both sides; after all, I am a woman, so I have some innate talent for over-interpreting other people’s (generally men’s) words, often into something hurtful. And refusing to unambiguously say what it was I am after. But I saw the problems involved with that, and have learned to communicate with words. And if the other party does that too it works out wonderfully! But if the other party hears commands or reproaches or whatnot which just aren’t there, and beats about the bush concerning their own desires, it still goes wrong. And knowing that people can do that does not mean you know what it is they’re not saying, or what it is they’re hearing in your words. Drives me mad sometimes!

The book does not offer much of a solution unfortunately. You can’t just ask these evasive people what they want because they won’t tell you, and asking “do you just say that because it’s a polite thing to say, or do you mean it?” is not going to do the job either. So somehow you’re frustratingly left to try to interpret what the other really means. And history has seen so many examples of that going horribly wrong. How many marriages have stranded on such things going completely pear shaped? I tend to still think saying what you think is, overall, a better strategy. My way is the way!

It was a very educative book. It was a bit like talking to my sister about such topics. Having to admit that maybe you’re trying to do the right thing, but that maybe you do it completely and utterly wrong, and that the people you would like to blame so much are just as right (or wrong) as you are yourself. Painful, but useful, too. I can recommend it to anyone! And I’ll keep on struggling with the above mentioned issue, but for instance the pause thing is something I may very well use to everybody’s advantage soon…
Posted by Margot at 17:46

Your way IS the way, says the sister you referred to.