We would be back in Parc! The previous time, we had restored a ladderway; this time, we had our eye on an alternative route down. Around the corner from that ladderway, a shaft goes down. We had never done anything with it, but some time ago, David had decided he thought he knew where it went. And he wanted to know if you could get through!

If you go down the ladderway, you get to a sublevel. A bit further down there's a winze that ends in an ore chute. If you pop out there, and you walk some ten meters to the right, there is another ore chute, but it is clogged. Would that where that shaft goes? So we went in to have a look.

At the entrance, we first cleared the channel through which the mine drains. If we lower the water a bit it's easier to get in without overtopping your boots! And when that was done we went to the shaft. David rigged it and Edwyn got ready to drop it. David and Phil went down the ladderway to meet him on the other side. Paul and I stayed at the top. I had a cup of tea! 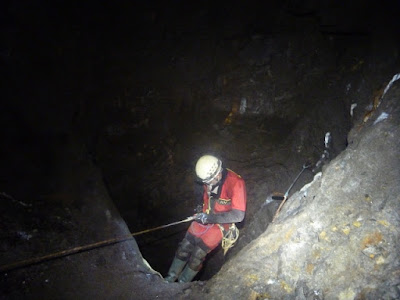 Edwyn starting his way down 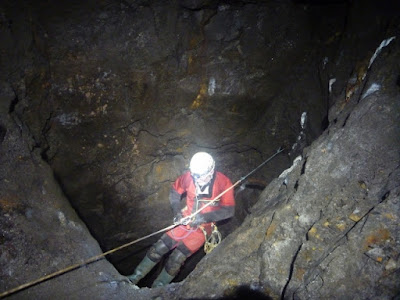 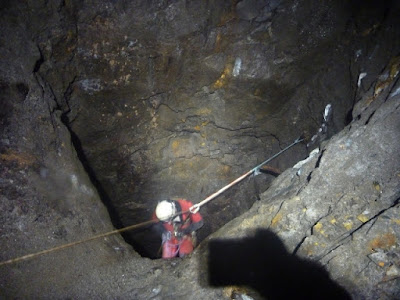 After a while we heard Edwyn mention the shaft was blocked with so much gunk it wasn't worth trying to dig. We figured that would be it.  But then some clanging and shouting and prodding followed and it was clear the men were giving it a go anyway. After a while I got bored and went down the ladderway myself. We had two ropes, but I was hesitant to go down the shaft, as it would be very difficult to do without kicking some small bits of rubble down, and even small bits hurt if they fall from height.

I found Phil prodding the chute from below. David was looking on. It was all very interesting but I figured they may soon call it a day. As they had nicked the ladder at the bottom of the chute I had come from (I had to come down on the rope) it would be a bit of a faff to get back up. I figured they'd follow soon so I started my way up so as not to cause a queue. But I was being pessimistic! I made my way all the way up and was greeted still with clanging and shouting and prodding coming from the shaft. And then Paul said he heard voices come up the ladderway. OK! And the rope had gone slack. Edwyn must have managed to slither down the chute, and climb back up the ladders! So I descended a bit, removed the deviation, and then pulled the rope up. Day done!

We went out again, and changed. It wasn't very late and I was glad. The day after would be a tiring day at work again!
Posted by Margot at 09:29