While I had been either digging or staying home, the ThursdayNighters had explored a ladderway we had worked with before (I can't quite find when) and which they had deemed not really usable. Some ladders in it, though, were fine. And there is a rather central ladderway in the same mine that has some ladders missing. They had figured they'd sort that. And they had started that but there were two ladders to hoist up still. That was our plan for the night!

We gathered, changed, walked up and went to the top of the ladderway to ponder. Then we went down. At the bottom of the ladderway there is a sort of mezzanine level that leads to an ore chute you can drop to the next proper level down, and a shaft that's part flooded. The shaft had a new traverse past it! I had to try that. 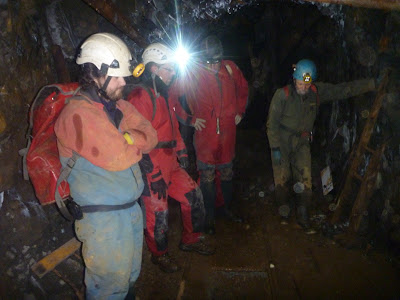 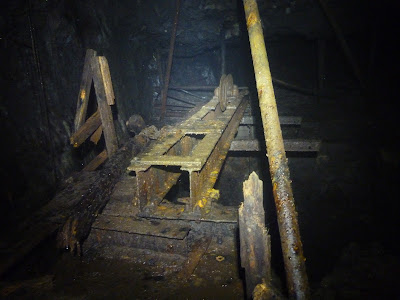 The top of the shaft seen from the back

While some of us faffed around with the traverse and what was behind it, Edwyn rigged an elaborate 5-to-1 rig for hoisting up the infamously heavy ladders. Then we had to put the first ladder into position! And then the hoisting started. David and Phil were up in the ladderway to guide the ladder and put it in position; Dave L was hoisting; I helped feed the rope through, Edwyn guided the ladder from below, and Jason moved the rig every time we ran out of rope. Paul was sitting on the beam the rig was tied to to provide counterweight. With a 5-to-1 rig a modestly sized man like Dave can pull a heavy ladder up on his own! Things went well. Soon the ladder was in position. Then we started on the second one. 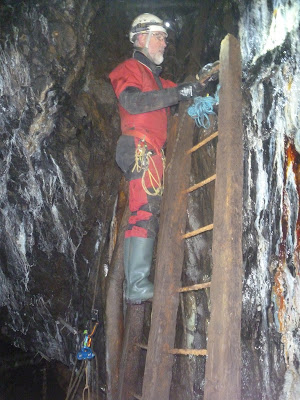 Edwyn ties the first ladder to the rig

We did the same for the second. There was one incident with Jason getting his hand stuck but no serious damage was done. And the ladderway was complete again! We had a cup of tea and a sandwich to celebrate and then we went out. Nice and early! I'm liking these short Thursdaynighter trips. The week before it was nice and short too! I'm sure it won't last but I'm enjoying it while I can!
Posted by Margot at 08:24