Last year, it had been quite a momentous part of the year. The student presentations in my Palaeoceanography module. This had been designed by James back in the day, and had been altered by me. The students are subdivided into six groups, and all six tackle an interesting climate event from the past 200 million years. They make a full hour (so actually 50 minutes) lecture about it and present it to their peers. The material is part of the exam material! The idea is that they hopefully know a lot about the topic they present themselves, and that they also learn from their peers. They only have to answer questions about two of the events, so even if four presentations aren't very good they can still be well-prepared.

As they need to know everything they need to know to get a perfect score on an exam question, I need to be razor sharp and notice anything they may either miss out or misrepresent. And I have to mark the presentation and time it. And notice who asks questions, as that is also one of the things their mark gets based on. The discussion afterwards is part of the scientific discourse! So I have to have the six topics in clear focus in my head. Last year I did the module the first time and had had to do some very extensive reading up to know it all. Ideally, I would have a powerpoint lecture ready myself, but when would I have time to make that? That's a pipe dream.

This year it started well. The first presentation, on Mesozoic Black Shales (riveting, I know), went well. The presenters were a bit ambiguous in their decision on whether these shales are so black because of production or preservation reasons, but otherwise they did very well. They should have been a bit more confident in their delivery; too much notes were used! But one can't have it all.

Then a group talked about the PETM (a very warm event, probably related to methane emissions, some 55 million years ago). I needed to step in and add to that presentation. And re-explain a few things that had gone wrong. I try so hard to weed out my students' misconceptions but it doesn't work all too well! And the same held for the third talk, about to what extent Drake Passage contributed to the glaciation of Antarctica.

The second day was a bit heavier. We had two student presentations, both which needed serious focussing and rectifications at the end. One was about to what extent the Himalayas had contributed to the glaciation of Antarctica, and the other about what Panama had to do with the glaciation of Greenland. Then there was the Friday seminar, about modelling if and how creatures get dispersed during events like the storm from earlier this year, which had destroyed the Holyhead Marina. It could be a good thing; creatures need to disperse, after all. But if it is invasive and harmful species that disperse it's not so much appreciated.

I chaired the seminar too. It was technically a talk in my colleague's series, but he had given the impression he didn't introduce his speakers anymore, and although he turned out to be willing to introduce this one he also had to liaise with Assembly Members earlier the day and wasn't sure if he would be back in time. So I introduced her, sat through her talk, and went back to immediately continue the student lectures. Quite many students hadn't come back after that! But that's their loss. The last talk, on the Messinian Salinity Crisis, was one of those where I didn't have a lot to add. My guess is that students will largely choose to answer questions about the first and last talk! We'll have to see. But this event is over now and I can go back to my marking! 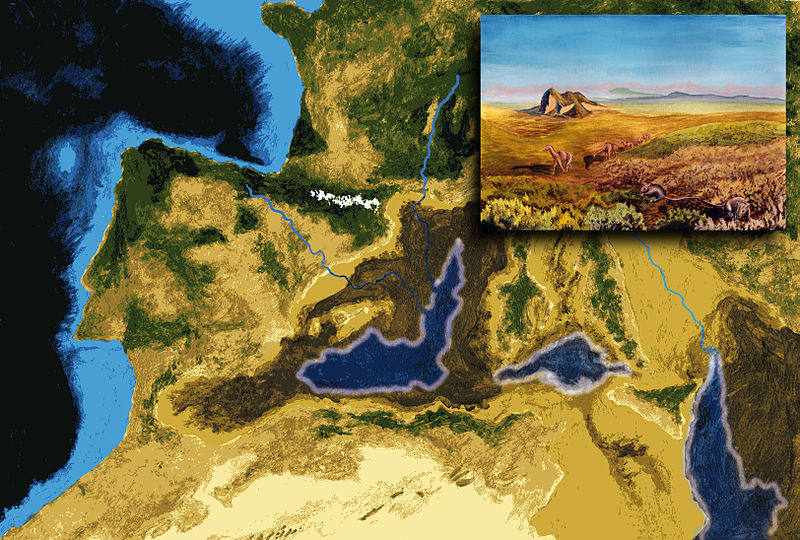 Artist's impression of the MSC, from Wikipedia. Made by Paubahi.