I mentioned my apples are ripe! They are very nice. Crisp and fresh. But if my apples are ripe, other apples are too. Phil also has a tree in his garden, and it is prolific. He dropped a big bag of apples of at my door. I ate some; they are nice (but not so nice as mine, as Phil himself admits), but there were way too many of them to eat like that. And I wouldn't get to eat my own! I had to think of something else.

Although I felt the pressure of term and house I peeled a fair number of them, and made them into compote. It was very nice! And it took three meals to eat it. And then i still had most of the apples left. I had to make another batch! I made sure to do the peeling when there was something especially interesting on the radio. I think compote is about the quickest stuff you can make!

The next time I saw Phil he brought me more apples. These i took to work to give them to David. He likes apples! And he regrets not having planted an apple tree when he bought his house... 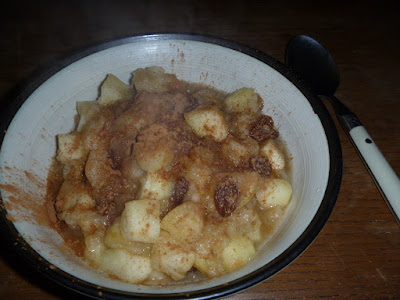