In March I got a request from a chap I had been on a research cruise with. Not only was he a sea-faring researcher; he also was the Book Review Editor of the Elsevier publication 'Proceedings of the Geologists' Association'. Was I willing to review a book on Submerged Landscapes of the European Continental Shelf? I had a little look at what the book was about. And I thought it was a good idea! The overall thought of the book was to evaluate what bits of the European Continental Shelf would be likely to contain interesting archaeology and why. And in order to answer that question you have to know when what bits were exposed and submerged, and whether the submarine environment is depositional or erosional, including how that has changed over time. And then you have to also know where people would have been likely to have lived in the first place. Interesting! And I had pondered the European Continental Shelf extensively for the BRITICE project. AT least the UK/Irish bit of it, but that's quite a large percentage. I accepted the invitation. 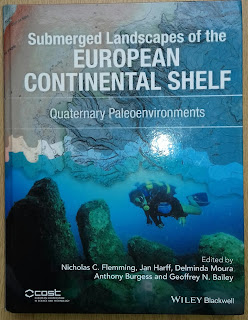 Over the next months I read it. It was very interesting! And then I got a reminder of Stephen, the chap who had asked me. Was I ready to upload? So I finished it off and tried to upload it. Generally, if you are asked to review something, you just login to the site of the publisher (Elsevier in this case) and all your tasks appear. If you have a manuscript in review it will be there, if you have been asked to review someone else's article it will be there, and there will be 'action buttons' and you can click them and then you can perform an action such as uploading a revised version of your manuscript or a review of the other person's manuscript. But there was nothing there! I pressed the 'help' button.

A few days later I received an email. They were not sure what I was referring to. I had given the name of the journal (well, the abbreviation anyway) and of Stephen and I supposed that would do the job. It didn't. They thought I was reviewing an Elsevier book, instead of a random book (by Wiley, since you ask) for an Elsevier journal. Telling them repeatedly didn't help. They even denied Stephen had anything to do with Elsevier. This was going nowhere! Contacting Stephen himself revealed in the end my document didn't count as a review, but as a manuscript, so I had been looking in the wrong place. It wouldn't come up in a list; I had to just submit it as a manuscript. Uh, OK! And of course I quickly got a confused response; could I submit a reference list with my submission? A reference list? Since when does a book review need one? But at least that was resolved by only one email. Finally it was sorted! And now I hope my review will be of use to people. It was interesting to do!
Posted by Margot at 09:29