I had been rather busy with preparing for the student presentations in my Palaeoceanography module, so even though the students had already submitted their essays I had not even started marking them until the presentations were done. I had figured that wouldn't be a problem; I didn't have many contact hours the week after, so I figured I could do it then. I had promised to release the grades by Friday!

There's always more to do than you see coming, and marking takes time. Especially essays. If it's a practical write-up or something like that it all goes a lot quicker; you tend to be able to see in one glance if an answer is correct. In an essay you have to check if the introduction sufficiently sets the scene, if all relevant information is presented, if all information is critically evaluated, whether the conclusions reflect the text and if the reference list is complete and correctly formatted. That's done in a bit more than a glance!

On Monday there were all sorts of emails coming in that I had to deal with. On Tuesday my day was interrupted not only by the biggest news in, pretty much, my life but also by student presentations, and on Wednesday we had a Board of Studies meeting. It just wasn't going fast enough! I decided I should work late on Wednesday. Just bring two meals and stay in the office until it's done. I worked and worked and it became six o'clock, and eight o'clock, and ten o'clock. I know that if I overdo it I get ill, and that wouldn't help, so by a quarter to eleven I called it a day. But then I had to go home, drink some tea, and let my brain settle a bit so before you're asleep some time has passed. The next day I was tired! Surprise surprise. I knew that day would be short due to underground activities. And I know I can skip these if work gets too heavy, but that was my birthday, and I really didn't want to be alone in my cold office on a day like that. So I cut out my entire running-and-exercises regime and just worked.

I was doing the marking in alphabetic order, and by the time we went underground I had reached the W. It would have to do! And then on Friday morning I finished the last few essays and send the work off to Lynda for moderation. Only after that did I put a document with general feedback, and the marks (and the way they were built up) on the website. Lynda had the excel sheet so she had all the information. And then I had to introduce our Friday seminar speakers; this time they were both internal (if they are PhD students they get half a slot).

I had promised the students some extra feedback on abstracts, as it's useful practice; I hadn't done that yet so I did that after lunch. In the afternoon we would have the SOS Xmas do. That would start at three; by half past three I was sorted and headed for the booze.

While I was there I saw I had a message from Lynda; she didn't have access to the website. Oh dear! I went back to the office and gave her that access. Then I went back to the celebrations. A while later she mailed all was done. It was about five o'clock. The party was petering out a bit. I scampered! I went back to the office and released the grades and the feedback. It may have been half past five but it still was Friday! I had made it! And with a reassured mind I could do some more work and then close down and head for the AditNow Xmas do, which was on the same day. And the next week I had another pile of marking waiting for me, but this has a slightly less tight deadline! I'll manage... 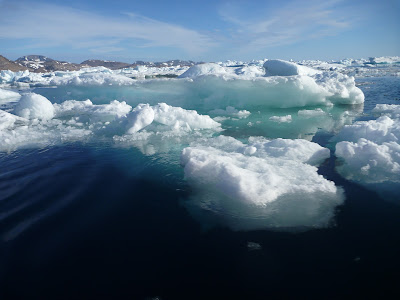 Some students wrote their essays about Heinrich Events: periods of massive iceberg discharge