Another birthday in a mine

A long time ago, I found birthdays important. But these days are gone! But still, a birthday is slightly more special than a non-birthday. And this year it fell on a Thursday, so the reasonable thing to do was to go underground. (Not that it necessarily isn't on different days.) Miles had a film crew to cater to that day so I joined the Thursdaynighters. They intended to go back to Pen-y-Ffridd, or bacon (bap) mine as we have started to call it, as the day after we would have the AditNow Christmas dinner and that would probably get late. And two late nights in a row is much!

We walked up, and picked up some firewood along the way. It was soaked but inside the mine it would dry out, and after a few months it would be fine. Once there David made a fire in a minute, and soon we were eating bacon, and sausages, and pork pies (one sees a pattern here). There were drinks too! Then I suggested cake. I had brought a tiramisu cake to celebrate both my birthday and my job. But the men wanted to go for a walk to let the food settle first. We did the usual scamper down, and then back up.

I then opened the cake. It was nice! Even though I' not much of a cake enthusiast. And to my surprise we didn't eat all of it. The Thursdaynighters eat cake pretty much every trip, and a lot of social pressure is put on me to join in. I don't like that! And now they wouldn't finish this cake. Oh well. The rest went into the campfire.

We also talked about stuff; my new status inspired a fair amount of it. Edwyn gave me some advice on where not to buy a house. Chris confessed he may have been looking at pretty much the same houses on Rightmove. But we talked about other things too! Such as future underground trips.

Not much later we packed up and went back to the cars. It may not have been very late but I was knackered! Not surprising. And the next day would still be quite busy! But it had been a nicely relaxing evening. 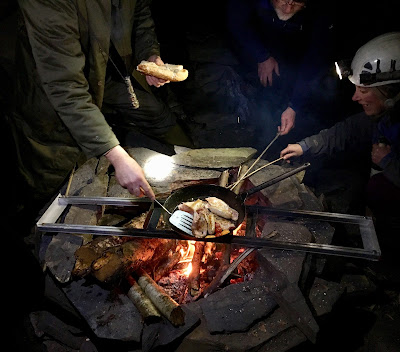