The idea was that with only 185 hours of work to do in December and January I should have time for other things. But Christmas comes in the way, and teaching obligations, and meetings, and whatnot, and time flew by. I still hoped to get some freewheeling done. When Miles mentioned he might go work on the dig in January 3rd, I decided to join. I came into the lab and the office on the second, so as to not feel too bad about shirking the next day. I came in in Arctic gear as I expected the heating to have been off for almost two weeks, but to my great relief, the heating was already on. It was comfy there! And not lonely either; Paul was in the office and Juan popped in in the lab.

With both some paid work and some work on my PGCertHE done I felt OK about running away the next day, the first official day. I was in the lab for two hours and then I drove off. When I got to the parking lot Miles was already there. Up we went!

I admired the supporting work he had done at the dig entrance. But that wasn't all; I went in, and I admired even more the supporting work he had done at the working end. There was loose rubble perched high above us there; a bit disconcerting. Now it was safely behind scaff! That meant we could start on the opening; there was a sub-vertical rock in there, and we wanted to get past it on the right. The plan was to wedge a small bottle-jack in between, to stop the rock from keeling over in that direction. Then we would remove (as is: blow up) the rocks in between, that so far might have had that job. We then might place a scaff pole for more permanent keeping-in-place of the subvertical rock.

The first thing we did was remove a rock that was loose. Miles had intended to blow it up, but it was small enough to get it out without such drastic measures. We did break it up with the breaker before lugging it out. Then we drilled a hole and placed a charge. Time for a cup of tea...

After tea we blew the rock straight out. The subvertical rock hadn't moved! Time to take a measurement for a scaff pole. While Miles cut it to size I started gently removing rocks from our intended opening; the good news was that it worked, but the bad news is that the bottle jack fell out, bouncing offf my helmet and landing on my hand. Ouch! But no damage done.

Soon we had the scaff as good and bad as it went in place. It was one of those jobs that actually requires three hands but I managed. And then it was all ready for the big moment!

I thought I might first change my batteries as they were rather flat, and it's frustrating being in new ground and not being able to see it. But I was impatient; I went through. It opened up nicely! Miles went to fetch my camera and spare batteries, and just past the new passage I used some of the latter. I could see! Miles had a small attempt in going through as well but he soon decided the opening wasn't big enough yet.

I went on. I could see the passage form where I sat. I slid in. It was a pristine level! Intact ceiling, hob-nail boot prints on the floor... I took some pictures and went to the other side. A collapse! Unfortunately. But not unexpected.

I had a look at the collapse; it was rather permeable. Not as bad as what we had been facing so far! Then it was time to report back. Miles asked about graffiti; I hadn't seen any, but I went back to have a closer look. Nope! None. Time to go back. 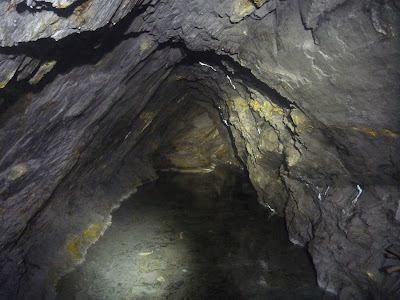 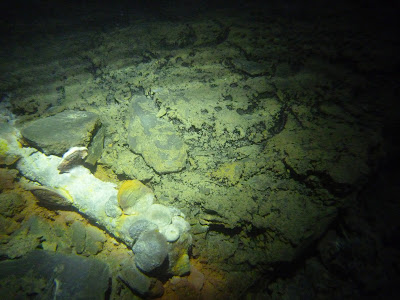 Old rails with shapely rusticles on, and hobnail boot prints

I showed Miles the pictures. By then it was about time to head out! I wanted to have a look in our other dig too. We had spent a long day opening it up again after a collapse; would it still be open? I scampered in while Miles gathered all his stuff. It looked exactly the same! Good! That was ending the day with two high points. Lovely! And with a bit of luck we would be back only two days later!
Posted by Margot at 09:41