Recover in the dig

We hadn't gone underground on Thursday. I had felt like going to bed immediately. That should have been a sign! But I sometimes am still slow to catch on. I enjoyed going to bed by 10PM; normally we only start making our way up by that time. The next day I figured I would be fitter than ever with this novel bedtime. But I clearly needed the sleep!

I had a long day in the lab. The lab is rather cold. My house isn't the warmest either. And the day after I had thought of going into the hills, but it was raining, and I had an unexpected errand in the post office which is only a stone's throw from my actual office, so I spent a few hours in there. working on my teaching qualification portfolio. But it's cold in the office too. Somewhere in the afternoon I felt my tonsils flare up. Oh dear! That 10 hour working day in a cold lab + going back to a cold weekend office had been too much. Shit!

I went home and took it easy the rest of the day. I also cranked up the heating. But what to do the next day? No way I could manage to stay at home and drink tea. And then an email by David appeared. Anyone up for the dig the next day? Me! One might question that decision, but I knew I would be better off snug in a furry suit in the dig than working hard in the cold office. I went to bed early and awaited David the next day. He showed up in his normal car: it worked again! Wahey! 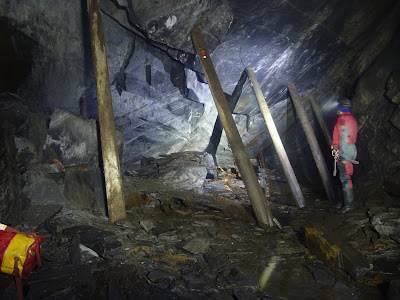 We then went back; along the way we picked up two scaff poles along from the pile. We first had a look at Dig 2; we knew Miles had been doing work there too, this time when we were chickening out. That work was impressive too! The passage now was big enough for a herd of cattle.

Then we went where we were due. Dig 1! Our main purpose was securing the Void. David was putting scaff in and I was the errand person; sometimes the guard, if he did dangerous things. When I wasn't needed I just made myself comfortable, switched my light off, and closed my eyes. A nice way to spend time when you're not feeling well!

When it was getting safer we worked together in the Void. At some point I was trying to put a swivel in an awkward position; I was touching the roof with my head while doing that. The Void is not a place where you want to do that! Bits will fall out on your head. And they did. They were bigger than comfortable. Suddenly a hand appeared and supported the roof. Proof of God? No, David being considerate! That was nice. 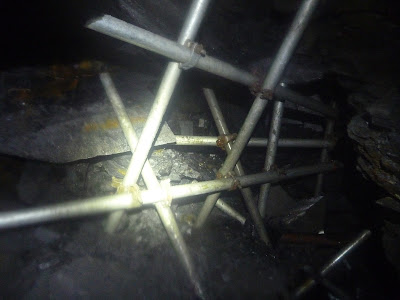 The amount of scaff we have put in there

When we had put lots of scaff in we had lunch. Then we went in once more; David would finish scaffing while I would move through, and try to photograph the next chamber along. I knew it was big! I thought I knew how big. I didn't. I went to what had looked like the end, and a portal opened. The chamber was twice as big as I had imagined! What a place. Photographing it took forever. I took 30 second exposure time pictures, and the camera needs to think about these for 30 seconds too, and it doesn't always go well, and moving from one camera position to another is slow when you're clambering through a chamber filled with huge pointy slate blocks with tripod in your hand. I was starting to worry about David starting to worry. When I was coming close to the chamber entrance I suddenly heard a shout. With my throbbing tonsils I managed to shout back loudly enough to be heard. Then I saw a light appear! 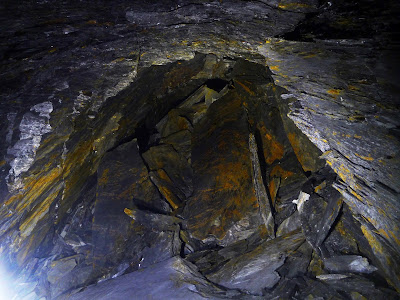 The gaping portal I ofund where I had expected the back wall to be. Estimated height of the arch: 8m

When David and I were reunited we headed back out. He had had a poke in the next chamber up. Now we were both knackered; I suspect David might have been a bit under the weather too. We came back to what is now known as the "shed area", as that is where we keep our tools; we made sure we didn't leave kit behind the void now. Then we went up and out. On the way back we had a cuppa at Mick's, where I also had a flirt with his biggest cat. I got home exhausted! But content. Probably still better for one's health than a day in the office...