I've done my first ever radio interview! I thought I would a while ago; Radio Cymru had been in touch twice about an interview, but neither of these actually happened. Last week I received an email from Radio Wales; they wanted someone from the BRITICE project to talk about it, and about other climate-related stuff. Other guests would be Profs Bryn Hubbard and Edward Thomas from Aberystwyth University, and Ian Hall from Cardiff University. Big cheeses! And they would record already on Monday.

On Monday I biked to the BBC building. The receptionist welcomed me and gave me a coffee. A good start! Later she lead me into a small studio; it would be me on my own. The producer and presenter were in Wrexham.

I put on the headphones and waited a bit. Soon I heard the producer; he was checking everybody was in place, and that we all came through alright. Then there was nothing for a while. Then I heard someone typing and muttering; soon after he started reading the 12 o'clock news. I heard only him; no leader tune or anything. When he was done he chatted a bit with the other people there. Weird! 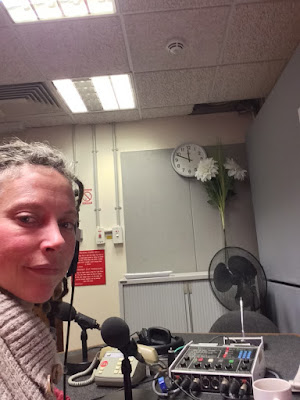 Me in the BBC Wales radio studio

After a while the presenter appeared. He kept us talking for a bit while technicians perfected the sound balance, and then we were off. I had been told he would first ask all of us to react to the recent news on 2016 being the hottest year on record, and then talk about things such as BRITICE. The first question I got, though, was worded such I was a bit taken aback by it. Later he asked about how exactly one traces an ice sheet. He hadn't asked why one would do that! This wasn't going quite well. I suppose a trained media person crowbars the things in they want to say, rather than wait until one is asked. I had been warned by the press officer, but it's hard to do it on the spot! You don't get time to think. Oh well. One learns.

Then the presenter closed off. Then he asked if there was anything we thought had been missed out. I did! I told him we hadn't talked at all about the why of BRITICE, so I got an opportuinity to elaborate briefly on that. Good! It isn't live, so that will be cut and pasted a bit earlier into the conversation.

Then it was over. I took off the headset, gave the mug back, and went back to the office. It would be broadcast the next day, but at a time I have Welsh class. I listened the day after, online; the bit where I explained BRITICE was not used! Actually, BRITICE was merely mentioned, not discussed. I'm not saying much of substance. Oh well. One has to start somewhere! It was a useful experience. And my distant colleagues did very well!
Posted by Margot at 08:44