More truancy in the dig

I had only been in the dig two days before, but that was hardly a reason to not go back. On Thursday the others chose to go to Pen-y-Ffridd to sit at a campfire and eat bacon baps, but that didn't attract me very much. I went off to the dig instead. Much more interesting!

Miles would already be there. I drove to an empty parking lot, changed, and started up. There was a half moon out so I didn't need my light to walk up!

I came to a silent dig. Slightly disconcerting! But well, it's not always noisy in there. The generator had run out of fuel and Miles wasn't drilling or doing other noisy things; he was screwing in another scaff bar in the far end passage. The original one was a bit too impeding. The previous time I had come through but Miles had found the passage a bit too tight, and moving that bar would help. He had also placed some charges which should get rid of some pesky in-the-way rocks and some wall that should recede. The resin had already set so we were ready to blast. Exciting start of the evening!

We drank some tea while the dust settled. Then we went back in; the results were lovely. Time to clear out the rubble!

When that was done we had another look. There were two rocks that really needed to come out next. One turned out to be loose; we shoved it out. Miles also managed to crowbar some blocks out of the wall. The next rock on proved harder; we had run out of battery power for the drill, so we wouldn't be able to blast that one this time. But progress had been made! It was time for Miles to come through.

I went first. With slight difficulty, Miles followed (I tend to overestimate how big passages are). After four months, he got to the other side of the dig! On the 29th of August he had reached the front of this dig; we got to see it three days later (and I posted it up five more days later than that). Four months for, what would it be; twenty meters? 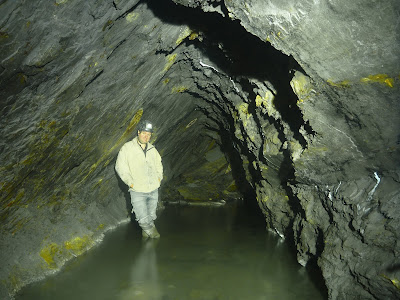 Miles in the level

We had a look at the collapsed next chamber. We saw two possible ways on; we are not yet decided which one to take. But the level is a bit featureless and after a while we went back. Time to pack up and go out! It was only about 10PM when I was back at my car. Nice and early!

Miles thinks we might be through the next chamber by Easter. Would we manage? Watch this space!