Paris, the legal side

One of the things I like about universities is the variety of interesting knowledge that sloshes around. If there are public talks you can pick up all sorts of knowledge that's quite outside your field. Sometimes you come across a talk about something very relevant to your own discipline, but seen from a completely different angle.

I forgot how and where, but James bumped into a lady from our Law School. They got talking. The lady turned out to be very knowledgeable about the legal aspects of climate change. That gave James an idea. And not that much later, she gave a guest lecture in my office mate Paul's Climate Change module, about the Paris climate sumit. As this is interesting for us all, everybody was invited. And I went. 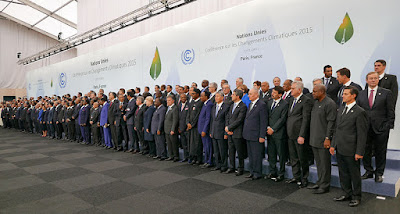 I knew the Paris agreement was not anywhere as robust and binding as I would like to see, but having a lawyer explain the details brings the message properly home on how little was actually achieved. First of all, there is agreement, but only this spring will countries sign up and ratify it. And even if they may have agreed on it, they can still decide NOT to ratify. If not enough countries ratify the whole thing falls apart entirely.

Even if everyone ratifies the deal, then still it is a paper tiger. It may be legally binding, but an agreement has only been made to ATTEMPT to limit global warming. And furthermore; if you break your commitments and pump endless amounts of greenhouse gases into the atmosphere and global temperature sky-rockets, there are no sanctions imposed. The only thing that could happen is that someone sues you. But who would? The small island nations? Their economies tend to heavily depend on foreign aid, so they're not likely to bite the hand that feeds them. And who else? There is hope; in the Netherlands, quite such a lawsuit already happened, which was great. They won, but the state shamelessly decided to appeal. This could be a long process!

Is there really no good news? Well, I suppose there is. What we really need is a mentality change. If it becomes not done to exhaust greenhouse gases, then it will pay off politically to indeed curb one's emissions. It's a bit like having a bike light in the Netherlands; 25 years ago, it was compulsory but nobody did it. In the years since it has become the norm to actually obey the law. (Not having lived in the Netherlands for the past 8 years, I hope my knowledge is actually enough to make a statement like that). If Paris has contributed to limiting global warming becoming something the (global) electorate rewards, then it has been a success after all! But only time will tell...
Posted by Margot at 08:36