A dig is hard work. The previous week we had intended to dig, but many of us were absent, and many of us were a bit under the weather. We decided to give it a miss, and just have a bit of a scamper! But we shouldn't do that too often. That dig won't dig itself! So the week after we wanted to go back. But we also wanted to chuck our new chap down a proper vertical pitch. What to do ? We decided to split up. David, Paul, Andy and Don went to the dig, and I would take Rich along the Catwalk, and down a pitch on the other side. Rob and his son Tom went with us too. I was the oldest! And most experienced! That doesn't happen often. It looked like I had to herd this rag-tag bunch along the route. No problem!

We decided on how to meet each other at the end of the trip and went our separate ways. At the Catwalk (some wobbly planks bolted into the wall, with a hand line) I first did a kit check. I knew from a previous trip that the hand line is bolted rather high; my short cowstail doesn't reach it. Neither would the cowstails of the others! We improvised a bit with slings and krabs and quickdraws until everybody was more or less equipped for the trip. It wouldn't be a set-up worthy of a Health and Safety instruction video, but it would do.

I figured I should go first. It's easier to see the catwalk from the end than from the beginning; this way I could keep an eye on people! And I had to bring the rope. I had unthinkingly given my rope bag to David. Oh dear! I hung the rope from my harness, hoped it wouldn't snag, and set off.

Tom came second. He did well! The Rob followed. That left Richard. He revealed he wasn't so keen on the wobbliness of the planks at some point, but didn't want to stay behind, and went on. Spiffing! Only in November he had been terrified to walk a short, broad ledge next to a modest drop; now he was happily scampering across some very exposed, wobbly planks avove a high drop. He's doing well!

On the other side there was another traverse; a lot shorter, but it had no planks. We did that too. From there I went aead; we had seen bolts in the wall and ceiling, but from a big distance you can't really see how to rig it. I decided I couldn't reach the furthest bolts, but I could reach a chain-with-krab in the ceiling; perfect for a pull-through! And that was what we wanted anyway; it would be a bit much to send these not-so-experienced people back up the way they came. 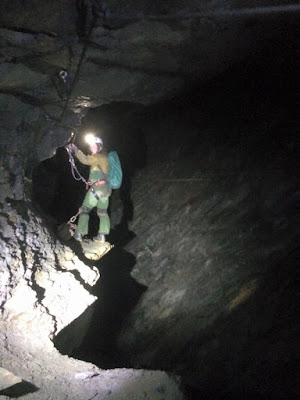 Me on the ledge. Pic by Rich. 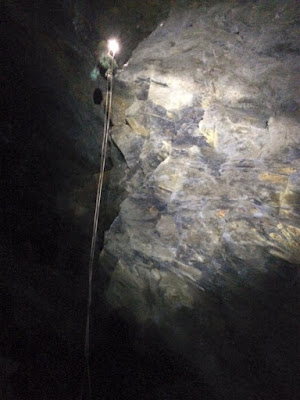 Me coming down from the ledge. Pic by Rich.

I rigged it, and sent Tom down. All went well! He's a confident chap. Then came Rob; he had a slightly cobbled-together assemblage on, and it needed some tweaking before it looked like he could safely descend on it. But we got there, and he was down too. Good work! That made Rich next; he did very well. Then I could come down, take down the rope, and go and have a look at what the others were up to.

We had designed a system for signalling whether we were still where we had started off; they clearly were, so we went their way.  Rich had had enough, so he decided not to come with us down the pitch. Tom, Rob and I did go. Soon we found the others.

I wanted to see what progress they had made, so I stuck my head through. It looked better! But still a lot to do. It was getting late, so I was keen on leaving that for another day. I had seen what I wanted to see; I then tried to set a good example by immediately leaving. When I got to the pitch I heard Rich sing; he doesn't like being alone in a dark mine tunnel and will sing away his unease. Quite atypically for a mine explorer, he can actually sing. Maybe his choice of songs would not be mine, but hey ho. My desire to reach my bed was stronger than my desire to hear Rich, so I went up the pitch anyway. On my new ascender; it was great! No slippage!

A while later we were all up and out. We'll have to come back soon for more progress. But I am also keen on more SRT; both to see what Rich is up to, and to enjoy my new croll!