Sometimes an assignment needs updating. Sometimes that means that you, as responsible staff, have to update yourself. For my Laugharne assignment, the students have traditionally been asked to plot data manually on a ternary plot, and to take a value for the Fisher's Alpha diversity index off a graph. That's a bit old school. I figured it was time to make the students use something more advanced. But that meant I had to learn to use something more advanced.

So what to use? For the plotting, I saw there had been students who had made the ternary graph in Sigmaplot or MATLAB. That gave me an idea! I had used Sigmaplot at some previous employer; I hadn't noticed we had it here too. So I decided to write a how-to guide for doing the plot in that program. It was a bit of a wrestle as there is more to it than you may expect, but I got there. That would do as far as I was concerned; one method will do and I don't speak MATLAB.

But the Fisher's Alpha? That's a tricky one. Some students had found an online calculator. Works for me; it was put up by trustworthy-looking people, and it generated fine results. It was a bit opaque, though. I'd rather find some other way.

Then I gave a presentation about my PGCertHE experiences.I did mention my intention to change the Laugharne foraminifera assignment to something more modern. One of my colleagues, Yueng, was in the audience; she's very tech-savvy, and she suggested she could do all of that in Matlab. She said I should pop by one day and discuss.

It turned out that several other assignments of the same module already use MATLAB; by introducing it to this assignment we are elegantly aligning the lot! And it's a very useful language to speak; not only for the students, but also for me. It sounded good! And the module leader, Suzie, had a ready-made assignment for introduction to MATLAB. I started there; she was very clear in her instructions so before long I had some nice example graphs on my screen. A good start! 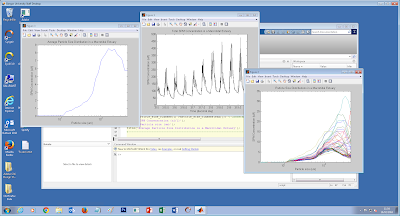 Me taking my first MATLAB steps, thanks to my colleague Suzie

Regarding the Ternary plot: there is a script for that. I just have to understand it. And then to adapt it to my own needs; I need several groups of data points in each their own colour, and then I need different symbols for average values. I'll be needing Yueng for that!

For the diversity index there was no ready-made script. We'd have to start from scratch! So we first had to break up the calculation in manageable bits and then code them. Easier said than done. I decided to see if I could do the calculation in excel. And after some puzzling I did it. And it's a tedious process; we wouldn't want to do this for many samples, but it proved I had nailed the process. Now we only have to explain this to a computer!

I have struggled with command-based software before, and I don't find it easy, but I know that when it starts yielding results it's very satisfying! I don't know what the students will think of it; just that the previous cohort requested it doesn't mean the next cohort will appreciate it. But at least I will have learned a very useful skill!
Posted by Margot at 14:50