A dig can be a very long process. I expected our dig to be one of those. There was an opening big enough for a person, but there was a pretty much endless amount of loose stuff ready to slide into it, blocking it again. It might take a while to get that secured. But we would just keep chipping away at it. And we would even bring a wheelbarrow in order to make the shifting of loose slate quicker. And we had informed Miles, the Go Below chap, and he'd decided to join us to have a look for himself.

We had another unusual face in our midst: Llion, who had been a regular before my time, but had had an unpleasant car accident, and it had taken some two years to get over the medical and legal consequences. But now he was back! With an ankle that probably would never be the same, but that clearly wasn't going to stop him. I had heard a lot about him, and it was nice to put a face to a name.

We went in, carrying the wheelbarrow over the first big collapse, and rigging the pitch. We actually managed without David, even though the bolts are high up. Success! He was quite impressed himself and proceeded to abseil with the wheelbarrow. As you do. I followed, and took the opportunity to take a few pictures, as I had forgot my camera a previous time. This was my chance! 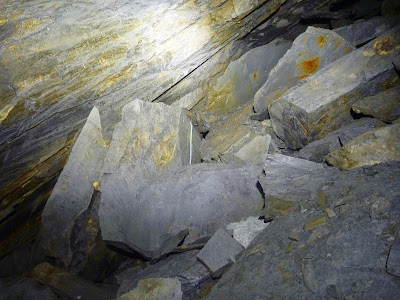 The bottom of the chamber; from the blue rope you can see what Edwyn pulled down a previous time 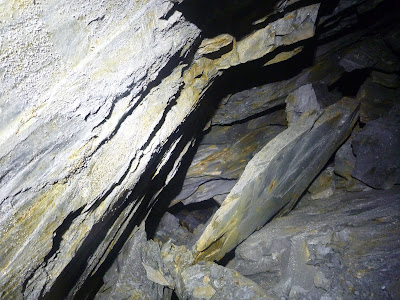 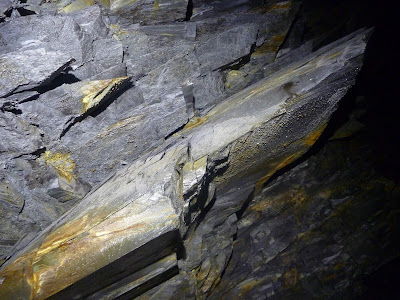 This is pendant above your head when you go through. Up close the cracks look more intimidating!

When I had had my fun Miles went up; he hadn't seen it. David and Simon went with him. We heard all sorts of rumbling and crashing; they were clearly getting on with things. Good! We send Llion up too; he also hadn't seen it yet. And before you knew it it got quiet. Had someone managed to go through? Well yes! As we didn't want too many people in the chamber itself; it was very unstable, after all, and a rapid retreat needed to be possible, we couldn't all stand there and see what's going on, and I was in the tunnel with Don and Andy. But then a grinning David appeared; he had been through!

The others up there went too, one by one. Then I saw my chance! I slid through, and stepped into the tunnel that only we had been in since who knows when. Special! And immediately my eye was caught by the little caban on the left; maybe initially a trial tunnel, but later clearly enclosed with vertical slabs of slate, and furnished with wooden benches (now gone) and festooned with a marmelade pot. Very nice! I took some quick pictures, and looked at the entrance, if that is the word, to the next chamber. That was quite some slate there! I do not see us get through there. But who knows! 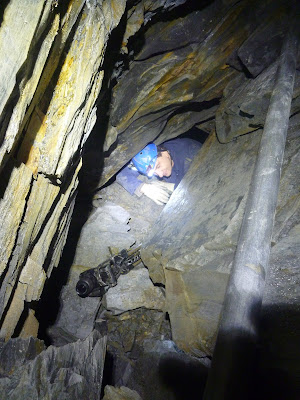 Andy in the squeeze 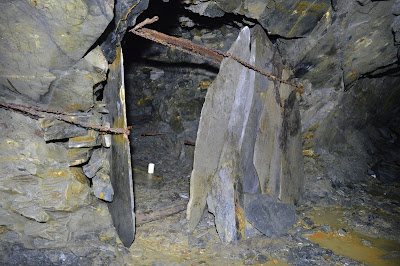 The caban; pic by Andy 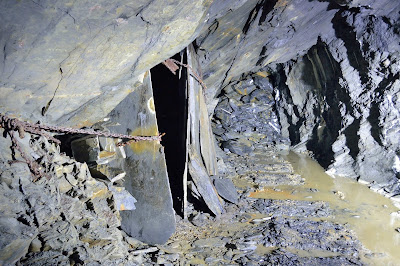 The whole tunnel; notice the blockage at the end. Pic by Andy

After me Andy went in, tripod + camera and all, and he took some better pictures. He was the last. We could get out! It took a while, with all having to prusik up (David with a wheelbarrow), a wheelbarrow to carry over the collapse again, and the de-rigging. We walked back through the amazing moonlight. This was a extra succesful night; we had explored new territory and we had Llion back! Good stuff! 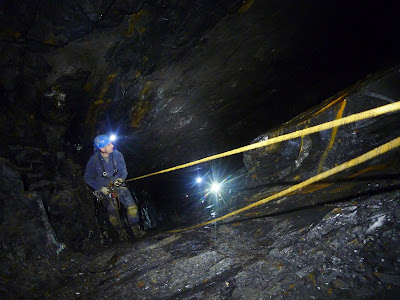 Andy coming back up the slab