I like the weekly climbing. I know Indy isn't the most advanced climbing hall in the world, but hey, I only started climbing two months ago, I can still hone my skills there. But on Friday morning I got an email, inquiring who wanted to come for dinner that night, and I thought it'd be nice to join. It's a nice bunch of people! And during that dinner one of the men announced he would go climbing in the  bigger hall in Caernarfon the next day. Anyone fancied joining?

I figured I could sneak a climb in. And I was curious to see that other hall. I joined! I drove through the driving rain to Caernarfon and found the hall easily. Inside i found Simon. He showed me around a bit. This place was huge! The walls were extensive and toweringly high. Intimidatingly high!

While we were looking around a third person Mags, who I'd met the night before, showed up. We warmed up a bit and got started.

As we were with three I suggested I started on the nearby auto-belay machine while the others belayed each other. And it was scarier than I thought! I had tried them before, the last time in Indy, but this was a rather high one. I climbed a bit and then let go, in order to get used to the idea. Then I climbed up a bit higher and did the same. And again. And again. After a while I got to very close to the top. That would do. I tried a 6A on the same route. That was hard; I never made it beyond a critical point, but that's what I expected. It was fun trying!

We then swapped with Mags trying the auto-belay machine. And after a while Eifion appeared. Nice! We kept trying routes. I had fun! And it was busy but there were always available routes. Interesting ones! And after a few hours we went for lunch. After lunch we would move to the high part of the hall. I didn't want to linger too long as I knew I had to get ready for the winter hike, but I wanted to try at least some of these tempting routes. 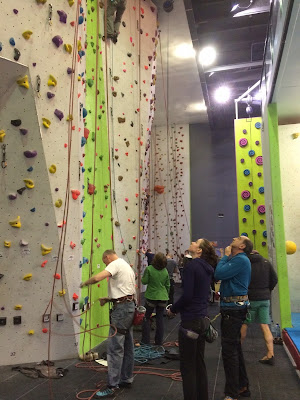 I tried a nice 5 something and then decided to go out with a bang on another impossible 6.  I wore myself out in the first third. That was good! This way I would leave early but still have peanut butter in my arms. 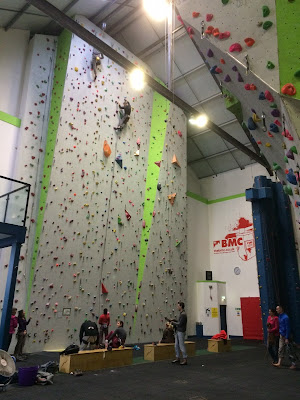 I still have enough challenge to face in Indy, but this excursion further west had whetted my appetite!
Posted by Margot at 09:00