Jaco and Marjan invited me to go for dinner with them. That already sounded good before they told me it would be a Scottish night out! Bagpipes, haggis, whisky... count me in. It was a Scottish night, of course, because Burns Night was approaching. (I should have posted this on the actual Burns night! But I forgot.) And the venue was a nearby college that, among others, educated student to be chefs, hotel staff, asnd other functions in the hospitality sector. They seem to cook and serve a big meal every week in order to practice, and if you're on the diner club list you can come and eat it! Marjan and Jaco are, and they can bring guests. So I had a very neat name sign on a table (they go all the way there) as "guest of".

I made sure I looked fairly tidy as I had been warned it was a civilized affair. And the venue indeed asked for that! We had silver cutlery with initials (of the college, of course, not of the diners) and five courses and the poshest containers for butter and whatnot. And there was a fully equipped piper to welcome us.

When we sat down we got a speech, about Burns, the college, the person who had initiated the diners club, and whatnot. Then the dinner actually started; the first course was salmon. Very scottish! It was good. The second course would be haggis, as it needs to be on Burns night it seems, and it was indeed marched in by the head chef, who followed the piper. Then the master of ceremony recited a poem about haggis, while the waiters brought glasse sof whisky around. All good! 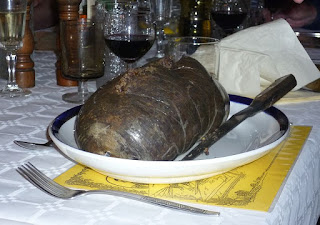 A stock image of haggis

The haggis was lovely. And the whisky too. I was enjoying myself! Then the mains came; slow cooked beef rump with pearl barley. That wasn't much of a success; anything slow cooked should be tender but this beef was chewy and dry. Oh well, if these students have nothing more to learn why would they be here? The dessert was amazing.

After all the food we joined beside the tables for a "For Auld Lang Syne"; I know the tune, of course, as it has been recycled, but I didn't know the words, and struggled a bit with the scottishness of it all ("We twa hae run about the braes"; how exactly should that be pronounced?) but we had the lyrics on a sheet. I think I pulled it off! Not sure about the logic of a Dutch woman celebrating Scottishness in Wales but hey ho.

As Marjan does not drink I had her whisky. And I had two beers too; it was Scottish night, after all. I would feel that the next day! I don't drink much these days. But it had been worth it!Who knows, maybe we'll go again...
Posted by Margot at 09:01