The previous weekend I had only admired the snow from a distance. But it was still there, and the message had come home I probably only have another year to enjoy the amazing beauty of Snowdonia. I decided to forget about work and just head into the mountains this weekend! I had a look at the map; I wanted to start somewhere that would get me into the snow fairly quickly, but not in dangerous terrain, and not too far away. I settled on the Snowdon Ranger path that leads to the top of Snowdon (duh) from the northwest. I had no intention at all of actually getting to Snowdon, but I thought I might just have some snow fun on the nearest ridge. I'd play it by ear!

I got up early-ish and got ready. I got into the car and set off. When I was already on the road to Caernarfon I realised I had forgot my ice axe. Oh dear! Don't underestimate Snowdonia in winter. But I didn't turn around to get it. I had crampons; that would have to do.

I parked at the designated space, kitted up, and off I was. The path started green, but soon a dusting of snow appeared, and the path got icy and slippery. It was higher up the mountain than I thought! So I kept going, beyond the first ridge. When I got to a pass I made sure to have a look into the valley on the other side. It was very beautiful! I had a look on the map; would I go on? But the path onward still looked perfectly safe and I was enjoying myself, so I kept going. The snow was getting deeper! 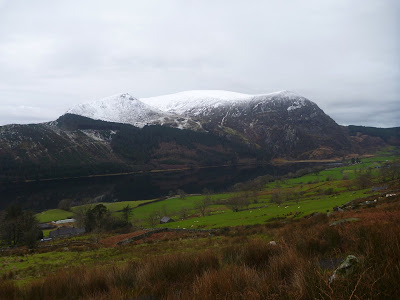 Starting out in the green 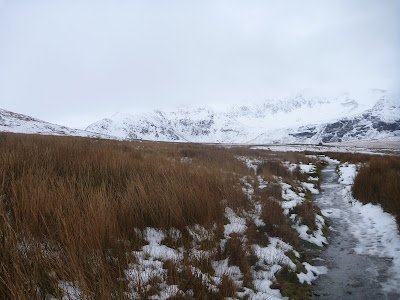 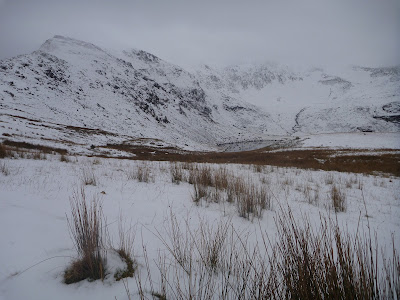 Brown with white turns to white with brown

The next time the path got to the ridge I had another look. I also had a chat with two chaps with whom I had been leap-frogging all the way. They turned out to be scousers (plastic or otherwise) and they didn't have a map. They took a picture of mine, and on we all went. But quite soon I had my head in the clouds. I was here for the views, so that was my cue for turning around. I got to something like 670m. It had also started snowing! I scampered down again. 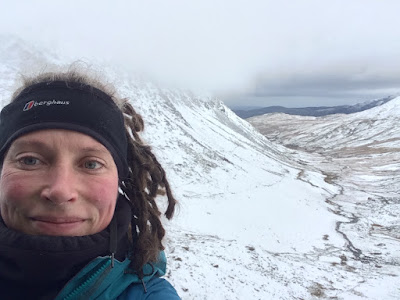 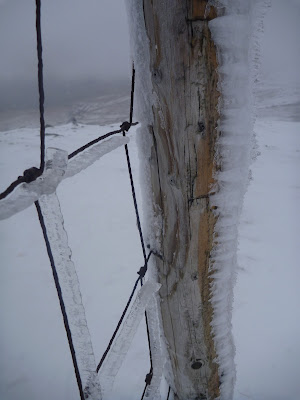 It must have been windy here in the previous days 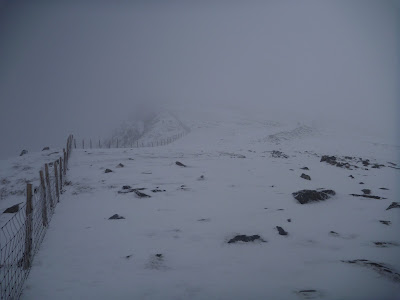 This is what the path onward looked like; not characterized by great views! I turned back. 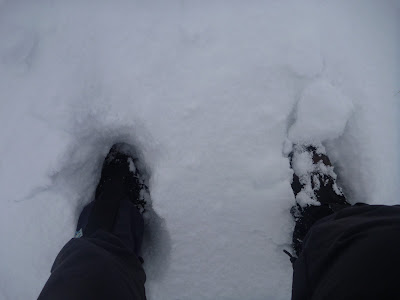 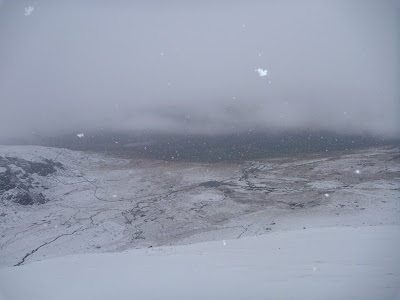 Down was quick. I didn't even have to slow down where it had been very slippery on the way up, as the few hours of thaw had sorted most of the ice out. I was back at the car at ~12:15. Time left for chores! A day with fun and usefulness. My kind of day!
Posted by Margot at 21:21