If you say you go into abandoned mines, you often get the response "you're crazy, that's dangerous". I hold the opinion the most dangerous bit about it is the drive to where we park up, and the drive back. Underground, not much goes wrong! But I know plenty of mine explorers who have got seriously injured on the road. And we are not risk-averse but we are a sensible bunch, so if something gets too dangerous we abort the mission.

This week we would do a trip with three abseils and some wading through deep, cold water. All good! But when we drove up to the meeting point my car struggled up the road. It was a road I hadn't done yet in the new car; the old car was alright with it as long as I didn't have to stop anywhere. Going up such a slope from a stand-still with at least one passenger was asking too much! But the new car is newer and it has a bigger engine (1.6 l instead of 1.3 l) so I expected no problems. But the extra weight of the car turned out to compensate for that extra volume! I had to stay in first gear, I had to stop a few times, and I burnt my clutch. O dear! And there was snow forecast.

We met up with Edwyn and Andy. Andy mentioned he had struggled to get up the icy hill. Shit! It would get worse. It was still a bit above zero but that wouldn't stay that way, and added snow wouldn't help either. We decided it was too dangerous! And we knew a mine close to the main road, so we decided to go there instead.

It's a nice mine. We this time went in on the side rather than at the top, as we had lost some time pondering at the other place. So it was a modest trip but it was nice! I saw some funny corners of the mine I hadn't seen before. And when we drove back it was snowing hard, and the road was terribly slippery! I was glad we weren't on the steep little road as I might have slid quite out of control. And we'd proven we are responsible citizens! And maybe we can do the three-pitcher next week... 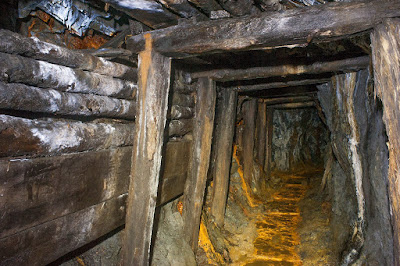 A picture from an earlier trip, by David
Posted by Margot at 09:03