The new Pontio building is proud of its Welsh roots. They make quite a fuss of their row names in the cinemas and theater; they go A B C CH D E FF etc. And that's a bit of a gimmick, but they make more serious efforts to promote Welsh culture too. In February they host a play, in Welsh, about the big strike of the quarrymen in nearby Penrhyn Quarry (the one that now holds Zipworld Velocity). I didn't know about this strike, in spite of it being a rather big event in regional history.

It's a sad tale, really. In good old Victorian fashion, the quarrymen were not treated well. It seemed things got heated when the quarry didn't allow the union to collect fees from the quarrymen. The quarrymen went on strike. Spoiler alert: the strike lasted 3 years, brought many to destitution, emigration or an early grave, and it also devastated the reputation of Welsh slate. The quality of the product wasn't doubted, but one figured you could order some, only for the quarry to shut down due to a strike. That doesn't help. So in the end the quarrymen lost, the quarry owners lost, and the entire Welsh economy lost. In a way, it's a tale of why one should treat one's employees well; if that would have happened, maybe Penrhyn Castle, which was built with the money made fromt he quarry, would have been less flashy, but in the long run, everybody would have benefited. A wisdom that has not sunk in even more than 100 years later!

But what about the book? When I told my tutor Jenny I had received an invitation to go to the play, with whoever from my Welsh class who wants to go, she advised me to read the book. That's the biggest spoiler alert there is, of course, but she figured I would need my brain cells for struggling with the language, and reading the book might help me with that. If you see it as a language exercise then already knowing the plot doesn't matter. So I read it! 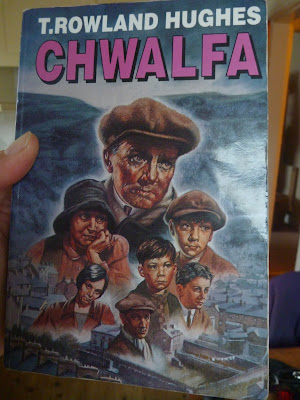 The story follows one specific family of which the father and the oldest son are strikers. The second oldest son has worked in the quarry too, but only for a short time, so he had lost his job before the strike started. You follow the family as they try to sit it out until the strike stops. They hope, of course, it's the quarry management that yields in the end, but it won't be. In the years in between, one son moves to the coal mines of South Wales; one finds employment as a journalist; and one goes offshore. The youngest goes nowhere; he's too young. He later dies. The daughter of the family is already doomed from the beginning as she ended up being made pregnant by, and thus having to marry, some alcoholic awful person who turns scab at the nearest opportunity. And while there clearly are opportunities, none of them are without their disadvantages; going offshore or into a coal mine are dangerous; a skilled quarryman would only be a semi-skilled coal miner, and journalists may be tempted to spend their money on drink rather than send it home to their struggling parents. A bleak book!

It wasn't the best book there is; it's clearly written for a young adult audience, and written in the seventies. What I liked, though, was that they had (purposefully, I suppose, given it played just after 1900) used rather old-fashioned language, to which I am not exposed very often (though certainly sometimes). It's good to see what language has been in order to know why it is nowadays the way it is. We'll see what the play is like! It's as good as sold out; clearly, there is a place for this kind of art!