The Christmas period is not only one for family and, if one wishes, religious celebration, but also a time in which people have time to go underground. Some of the chaps had gone underground on Boxing day, several had gone on New Year's Eve, but I hadn't been able to attend these. Then there was a trip on January the second; I looked forward to that! We'd meet in the Lakeside cafe for breakfast (cottage pie, as far as I am concerned) and then drive on to where we'd park and change.

We struggled a bit finding the entrance, but the weather was nice, which was a lovely change from the previous few trips, so I didn't mind some scrambling through the woods. And then we found it. 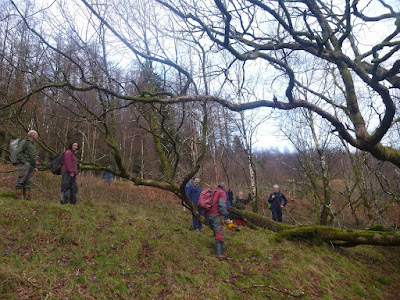 I had been here before, a year earlier, with the YCC. I remembered the stope we came into. The last time I hadn't taken many pictures, but I had never seen the results of the other photographers, so this was my chance to catch up. I was in a slightly lazy mood so I enjoyed the pottering about and making mediocre pictures.

The next step was going down a level via an impressive ladder. Below there was plenty to see too! 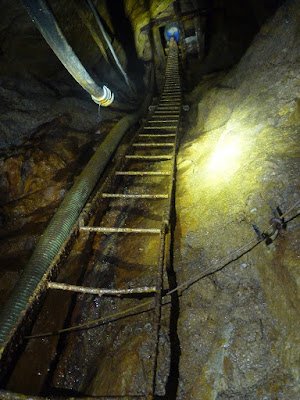 Someone coming down the long ladder 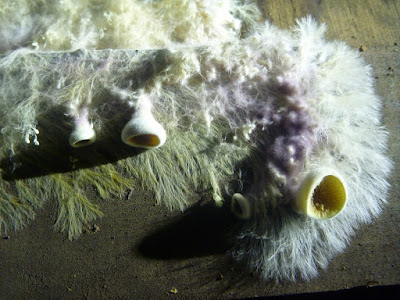 The way out involves very beautiful inclines. I didn't try to photograph those; that's hard! I hope one of the more talented/equipped/patient has. But when we came to the top we figured we'd split up. No worries. The way out was rather wet, and some had gone ahead as they were getting cold. We took some more pictures and then followed. At the end of the deep cold water we had to negotiate a challenging fence and then we could get back to the cars. 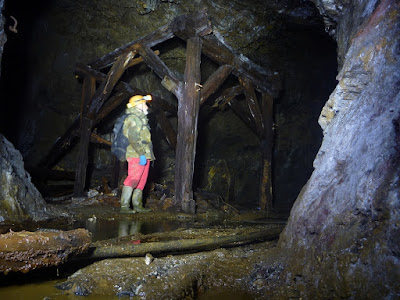 Don and a headgear

After changing we went to Chez Pingu as he had, for unknown reasons, bought a mound of food and needed people to eat it. And we are an obliging bunch! And during dinner we were entertained by his cat Sooty, who had recovered marvellously from a nasty accident. 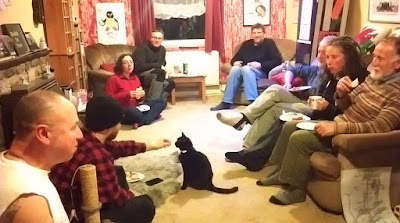 In Mick's lounge; pic by Andy

Altogether it was a nice start of the underground year. Soon we will go back to the dig the men had done during two occasions where I hadn't been there on account of being elsewhere, but which sounded very exciting and promising! The next Thursday I'd finally get to see it!
Posted by Margot at 13:39