The itinerary has been decided upon! That is, the itinerary of the first half of the cruise. And that is, the preliminary itinerary. The route we decided upon was pretty much based on seismics from the 70s and 80s; when we go out there ourselves we'll shoot 2015 seismics, and that will allow us to pick our target sites with more precision and confidence. And then there is of course life getting in the way; the weather will have a say in what we do, and material problems can force us to reconsider things. But that is for when we are on board. We have a preliminary route, and that's all we need until we go out there! I'm happy.

I spent another week with Louise in Edinburgh, to finish what we had started in March. And we made progress! And I even got some new cores to Bangor. I brought some cores back that had yielded all the radiocarbon samples they could, and exchanged them for fresh ones. Jess drove with me, and stayed with us the first night; the next day we did the core exchange, and then we said goodbye. She drove back, with the loot, on her own. And I stayed on, to gaze at blurry ancient data for some days more. The cruise had given me a good idea of what the seismic signature of the various types of sediments are, and how deep into a seismic profile we can drill. Or rather, what the 6m maximum penetration we can get looks like in a seismic profile.

We will core in the Minch, northwest of the Orkney Islands, and west and east of Shetland. It will be exciting! And then we do the North Sea; I know less of that as that's Louise's territory.

The work, like last time, was done in long working hours, which were supplemented by marking in the evenings, but unlike last time, I managed to go for a run. Twice! We had rented a flat just south of the BGS, and between our street and the BGS there was only a golf course. And around this (and many other) golf field there was much more green space. We were pretty much slap bang in a green belt in the city! It was great running territory. 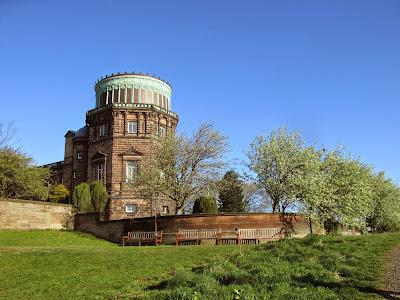 The Royal Observatory, standing proudly on the hill between out flat and the BGS 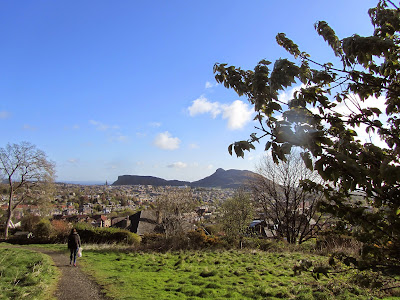 Walking to work; Lou on a path with Arthur's Seat as a backdrop


Like last time as well, we went to the pub one night. This time we took half the BGS with us! That was nice. Tom (the transect leader on "my" transects) this time took us to the Royal Dick. As one does! A good choice. Nice beers, good food, charming puppies that would chew on your hand.

I feel a lot calmer now. The main thing on the to do list for the summer is sorted! I can now happily work on the cores from last year, do my teaching responsibilities, and all these other things without having to worry about the cruise. It will be exciting!
Posted by Margot at 10:54