Understanding of North Wales sea level change is one step closer! Recently I wrote about how I had, by accident, become involved in a local sea level project. Sea level giant David Pugh had found old records, but in order to make sense to them and be able to do compatible modern measurements, we needed to find the benchmarks relative to which these measurements had been made. David had been digging out old Ordnance Survey maps to find out as precisely as possible where they might be, and he had already found a fair few on his own. Things were looking good! So the day came we would set off to not only find the remaining benchmarks but also contemplate where we would put instruments for complementary measurements. We convened with some people; Mike, who is an applied scientist; James, who is turning this project into a student project; me, who is a background sea level scientist, and of course David himself; and then there was Penny, James' somewhat silly dog. A great team! And it was a great day for it!

We headed for Morfa Nevyn, which turned out to be littered with benchmarks, including one on the gate of the local golf club. From this club's parking lot one has an amazing view over the bay! And this parking lot is big enough to throw a ball around; not insignificant either, at least according to Penny. 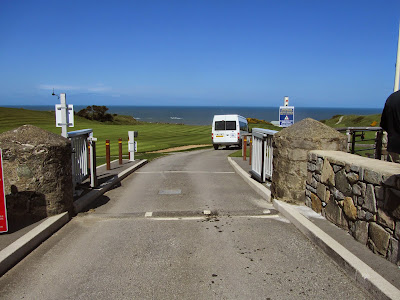 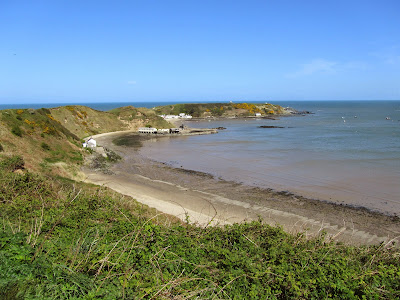 The bay of Morfa Nevyn


The next stop was Fort Belan, a Napoleonic fort which was now in private hands. To get there you have to drive over a broad, pot-holed road belonging to an airfield. Unusual! David was leading the way, and I was hitching a ride. We turned past the gate to a convenient place to park, and while doing that we both saw the benchmark. We had not even stopped the car! This was going well. The owner or steward or whatever person in authority he was had seen us coming, and greeted us. The search for the benchmark was over, but we had a good look around to contemplate where we could put a pressure transducer in. And Penny had a good scamper around. It was a beautiful place! 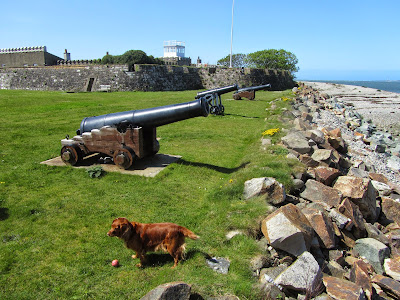 Keep out the French, Penny! 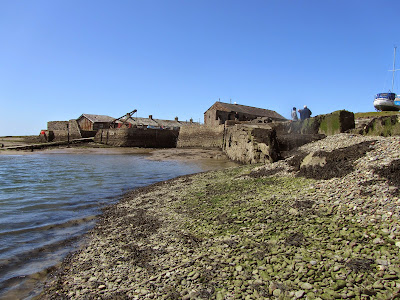 Where to put a pressure transducer? 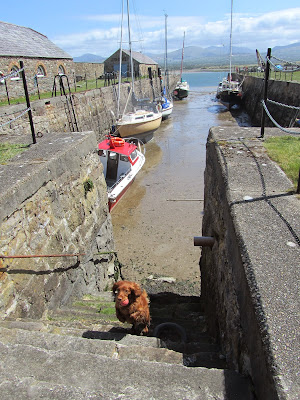 
When we were done we had got hungry. The local chippy was closed, so we headed for Caernarfon, which was our next stop anyway. We had a look at the dock and went for lunch; as a venue we chose the Anglesey Arms, which is snugly nestled in the armpit of Caernarfon Castle, as I had already noticed a year before, looking at it from the other side of the river mouth. When lunch was done we went back to the dock, looking for our benchmarks. By now our luck was running out; we saw nothing of the kind.

We then turned to the dock master. Maybe we should have done that before; he mentioned this dock had been thoroughly restructured in sub-recent times, with no stone left unturned. Including the stones with benchmarks carved or placed into them. Tough luck! But we would probably be able to find benchmarks further inland. Not all was lost. 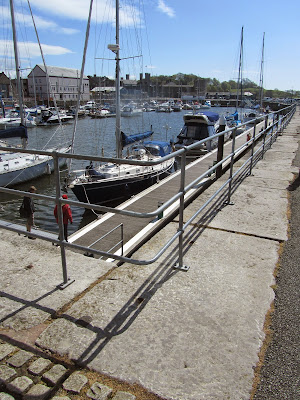 Then the dock master added an unexpected tail to our quest; he mentioned there was a rock in the dock wall of which he suspected if it was a meteorite. Could we have a look, to see if we agreed? Well sure. And it bloody did look like a meteorite. Another item for the to do list! Just looking at it you can't be sure; you have to see the internal structure. So we will have to come back and saw some off. A weird task! But very exciting!

If we get a student for this project this person will start in the new academic year; not very soon. But in the meantime we can try and get our hands on the required amount of pressure transducers. It's an exciting project; I hope we'll take this further! If we don't get a student the next round we can always see if the next time we are luckier, but by then it will become a bit late for me. We'll see how it goes! And in the meantime we have a heavenly body (?) to think about!
Posted by Margot at 08:57