I am always right

Another book in the series of "read the classics"! And I suppose the Dutch among my readers have already recognised which book this is: "ik heb altijd gelijk" by W.F. Hermans. I already knew about it as a child, but had never read it. I even had no idea whatsoever what it was about. Hermans, by the way, was not only a novelist; he also had a chair in geography. And he's not the only great Dutch writer who was/is also a scientist; another one is Maarten 't Hart (sometimes publishing as Martin Hart, as Anglo-Saxons may understand that), who is a biologist. And a Bach-connoisseur. But to Hermans now. When I was in a Dutch second hand bookshop and I saw "I am always right", I decided to buy it and increase my knowledge of Dutch literature. And so I did. 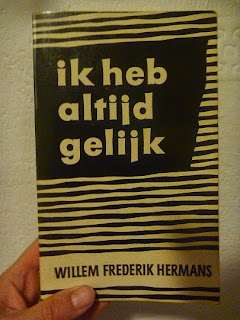 What I perhaps should have realised is that this book was published in '51; only two years after his debut novel: "The tears of the acacias" (De tranen der acacia's). I had read that; its main character is utterly insufferable (at least to me) and I struggled to finish the book. It might have been fashion; another very famous book from the same time ('47) is "the Evenings" (de Avonden), by Gerard Reve, who is seen as another of the "big three" of Dutch literature (the third is Harry Mulisch, of "the Discovery of Heaven" fame), and of which the protagonist also could do with a kick up the arse. And this book was no exception; the main character harvested very little of my sympathy. So I did struggle with this book! I don't cope well with annoying protagonists. But I finished it and it did provide food for thought.

The story is of a young man, a soldier, who is brought back from Indonesia after the war. The Dutch all know the following, but maybe not everybody else does; pretty much as soon as Indonesia was liberated from the Japanese, the Indonesians figured it was time to get rid of all invaders, and booted the Dutch out too. The young soldier had been on the educational path to become some kind of civil servant in the colony, but had been drafted when the was broke out. With the war now over, there was no colony anymore, and he didn't know what to do with himself. To make things worse; he had a rather nasty image of his parents, and didn't want to see them. And he was haunted by the memory of his sister, who had either committed suicide or been murdered; either way, at the outbreak of the war she had been found dead with her cousin, who turned out to also have been her lover. Both had been killed by his gun. An unpleasant detail is that this actually happened to the author's sister.

The protagonist has a lot of money that doesn't belong to him, and he goes on a spree of squandering it as quickly as he can, much of it on a woman he met on the boat back, and for whom he does not care, but who at least offers him a place to stay. Does he need that, with all that money? Not really, but he seems to want something he can pretend feels like home.

The only thing he half-heartedly tries to do with his talents (and his anger) is starting a political party. The main idea of this party is European unity. When I read that, I was surprised you don't hear much more about this book; isn't it terribly topical now the EU is balancing on the edge of the precipice, with Brexits and Grexits and bankruptcy and whatnot threatening? Lovely to see some thoughts about this topic formulated some 65 years ago.

Is it a surprise the political party isn't much of a success? So now what? Surprisingly, the man decides to clean up his act: he meets his parents (which seem very reasonable), ditches the girl, and tries to get a job. And then the book ends. Does this man have much of a chance of getting back to normality? Not really, as over the course of the short time he has on land he gets himself in a lot of trouble, and it will catch up with him. The police are already on his trail.

So would I recommend this book? Well, with caution; it is interesting to read all the political discussions with the advantage of hindsight. But it's not a particularly easy read. And if you want to read about optimistic, able, pro-active and constructive protagonists: avoid Hermans!
Posted by Margot at 09:22