Not much goes wrong underground. When I was member of the Devon Cave Rescue team, we were barely ever needed. Nobody I know ever got seriously injured underground. The worst I've seen happen is in the category of ribs being cracked on pointy rocks. And when I say cracked I mean something quite painful, but not needing medical assistance. But I do know of some near misses. One of these was one of us crawling through a narrow passage, and the material he was crawling over starting to move, almost burying him.

We were going to visit that very mine. Mick, who was the almost-buried one, had stuck his nose in recently, and noticed the whole passage seemed to have filled up. What would it look like from above? And while we were in there anyway, we could do some SRT practice; Edwyn hadn't done much and could do with building up some routine, and Paul needed to brush up his skills and confidence. Mick had even brought an elaborate Z-rig.

We walked to the lower entrance. It was a beautiful evening and a beautiful walk! Very pleasant. Almost a waste to get inside an adit, but we did it anyway. We saw the collapse, and Phil and Simon immediately started digging it. Soon they had a man-sized passage! But we figured we shouldn't go through; it might be dangerous (considering past experiences). We went out again! And continued our beautiful walk up the hill. 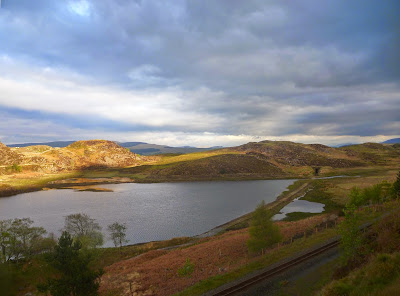 
We got to the high entrance and first had a cup of soup. Why not! Then we rigged the pitch, just as a single rope, for now. I went down first. The pitch ended at a broad ledge; from there a ladderway went down. It looked iffy. Rotting timbers, piled deads, missing rungs... I decided to wait for the next person to come down. If the place would collapse on top of me I wanted someone to notice! When David appeared I did venture into the abyss. It looked iffy. At the bottom of the ladder I decided to not get off. I'd seen enough! This place was dangerous.

The others who had come down (which turned out to be everybody but Paul) had a look too. They agreed! We figured it wasn't worth pursuing this as a through trip. And on that note, I started my way up. It wasn't particularly early anymore. It was therefore also clear there would not be any Z-rigging SRT practice.

At the top of the pitch I found Paul, in full SRT kit. It turned out he had just gathered the courage to come down when I had started my way up. Oh dear! We should really do a weekend training. Some more people came up, Phil among them. We sat at the top of the pitch, and I seized the opportunity to have a chat with him in Welsh. Work came up; I wanted to say I was done with marking dissertations but I wasn't sure of the word "dissertation" in Welsh anymore. Neither was Phil. Luckily, Edwyn was coming up. He was just coming past the deviation on the way up (which was probably the first time he did anything like that), but Phil didn't let that stop him; he demanded that Edwyn would reveal what the correct phrase for dissertation was. Luckily, Edwyn managed this multi-tasking exercise. (For the interested: it's "traethawd hir")

When we were all up it had got late. In hindsight, it was good Paul hadn't gone down! It was midnight when we left. We should do a whole day of SRT training one day. Good for all of us!