The teaching I'm taking over is mainly James's. But after 5 years of sea level research I have also become a sort of a go-to person for guest lectures on the topic. And that's fortunate, because in the past years such lectures had been given by a lady doing her PhD on the topic, but she was about to defend her thesis, and had already started to work at a university-associated company. And then the day came the lady in question would defend. And who would you call in as an external examiner? Roland, of course. James was one of her supervisors, and he is an old friend of Roland's. He decided to invite all sorts of people involved in the PhD over for dinner. And even I counted, as a sea level person. So that day provided a nice opportunity for having a reconciliatory beer with Roland. Good!

The viva started at 1PM. The plan was to go and have a pint afterwards! I checked that Jaco, my office neighbour and the internal examiner, was in on the plot. And a viva can easily last four hours, so that would nicely be beer o'clock. I thought I didn't have anything specific that afternoon, but I was wrong; I had to give the students some feedback on the Friday seminar, and that normally takes place from 12 to 1, but this day it had been moved to 4PM. Oh well!

Then I found Jaco in his office at 3 already. That had to mean they were done! He said Sophie, the brand new doctor, had done really well and had fended off all the questions in just 1.5 hours. Impressive! But that meant too beer o'clock had been pulled forward a bit. But a woman's gotta do what a woman's gotta do. I took Roland to the pub. Jaco only wanted to come after the seminar.

It was good to catch up a bit and leave past strife behind. But then duty called; I had to get to the seminar. It was about marine conservation at Chagos. The chap was clearly quite into this topic! A seminar is supposed to be an hour, including questions, but this chap needed more than 1.5. A bit much, especially for a Friday afternoon. 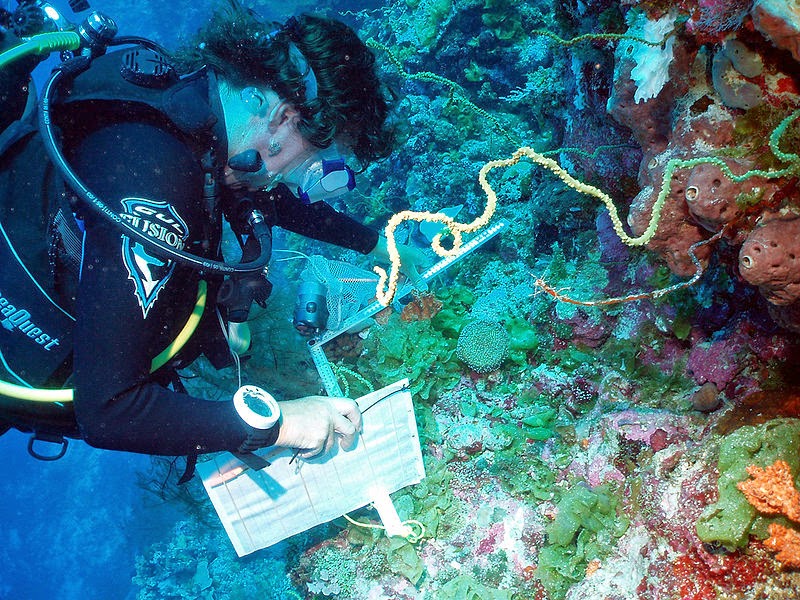 Convenient picture of a scientist recording something like coral biodiversity in Chagos, found on Wikipedia

When it finally ended Jaco and I went to the pub, where Roland joined us. And after one pint we went to James's, for dinner. It was a nice blend of people! Sophie the new doctor, her husband, James (her supervisor), Roland (the external), Anna (who did James's teaching last year, but now lives in Canada), Katrien (also an old acquaintance of Roland), Fabienne (a former Bangor postdoc who now works in Liverpool; I had met her the week before), Ingrid (the neighbour) and me. And of course the food was amazing! And preceded by nibbles, and followed by dessert, cheese, coffee, chocolate and wine. Blimey! James doesn't do things by halves. But when Roland decided he had to leave (he had another day in the field the next day) most others let them be inspired by that, including me. I was exhausted after a busy week, with the previous day being the apotheosis. And this day had been long enough too! And may the young doctor have a long and satisfying career!
Posted by Margot at 11:40