From above and below

We would go back to our pet mine Benallt, but as this mine offers deep cold water, dead sheep, agricultural waste, death from above, and more of that not everybody was keen. Many voices tried to steer this Thursday's trip away from that place. And some place we had had a glancing look at some time before became our venue of choice. We knew it was accessible, but you never know if it stays that way. We wanted to get in while we could! And we ded to try to get in from both the top and the bottom.

We tried to rig the top. That was a bit of a mess; I had an idea about a deviation, but the men thought it wasn't necessary. I let them have their way and we ended up with a rubbing rope. I should be more pushy! I tell myself that time after time but it's hard to stand up for your ideas if you're not raised that way. I'll keep trying. Anyway. The rope rubbed, the stope was hanging death, we decided to get out of there and try the bottom entrance.

So we did. I figured down there we wouldn't need the 100m rope I was lugging around. The men agreed. We also had a nicely short and ligth one; that should do! I didn't want to leave the long rope outside, thoug, for fear of (very unlikely) theft, so I brought it in, and left it at the nearest dry spot.

We soon came to some ladderway that was too wonky to go down. But there was nothing to rig from; without a drill we couldn't do anything there. We moved on, and came to a collapsed bit. There was a handline, but that started only halfway down the collapse! Luckily there was a metal pin in the wall. Good for tying the short rope to, and make it to the handline! 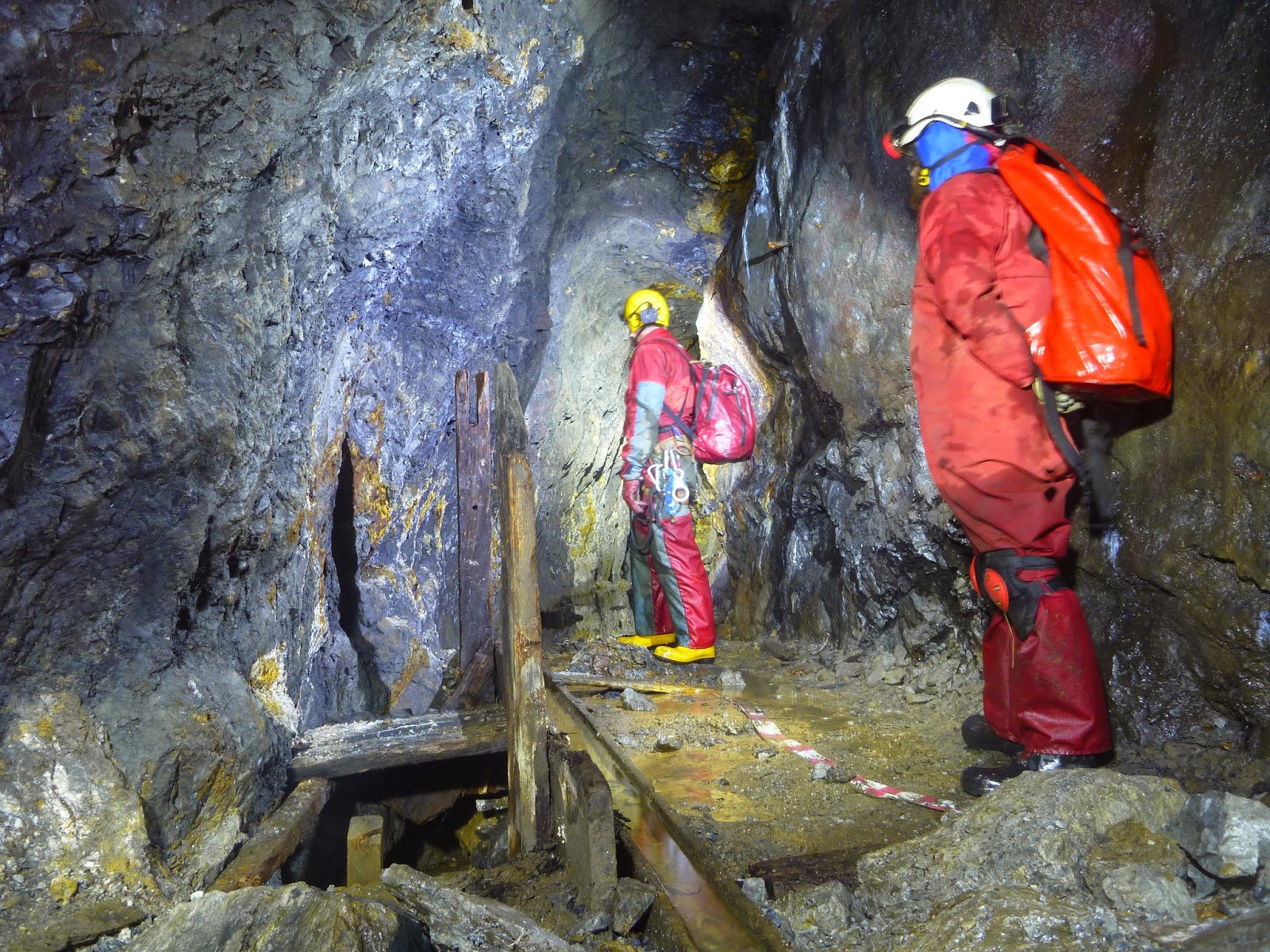 Pingu and Blober next to the ladderway in front of me

Where was the short rope? The men had dumped it even closer to the entrance than I had done with the long one. Sigh. I went to get the long one, muttering at the laziness of my companions. I tied it to the pin and off I was. It went! And went! And there were some nice ore chutes. And then there was a collapse. The end?

No, not the end; one could wiggle past. And het a glimpse of an immaculate stope! That was lovely. I decided to go back and get the men. This was worth seeing. I got back, tied the rope to a beam on my end of the collapse. It was safe now! But they didn't want to come. Really? Really. They figured my rope construction was only safe if someone would make sure the rope wouldn't slip off the pin. So someone would have to stay behind! Not good. Maybe come back with a drill, and do it properly. Hmm. Okay.

Well, pub then! We decided to go back some other day. In the pub we had a look at the map. Who knows what we'll find there! Next week!
Posted by Margot at 08:12