When we dropped off the students at the university main building the field trip ended. It was not quite time to go underground, though; we had to get ourselves and the equipment back to Menai Bridge, and then get the minibus back to the main building where the rental company would pick it up again. So we drove back to Menai, dumped the kit somewhere out of the way, and hugged Suzie and Jess goodbye. They had been minibus driver and backup glaciologist, respectively. They had been spiffing!

Now we could switch to caving mode. We dumped our own stuff all in David's car, and both drove back to Bangor. There we dropped off the keys of the hire vehicle and left. Job done! I was glad David volunteered to drive. I was knackered! And dehydrated; I drank a litre of water while he drove and felt better. I had been scampering all over the place all day, and not found much time to drink.

We met the others, or at least those that showed up; the idea of this half-term trip was that Pingu would bring his girlfriend, her son, and the son's girlfriend. But his girlfriend had a sore shoulder, the son had man flu, and he had ended up only bringing the lad's girlfriend with him. Clearly the toughest of the bunch! We drove up to where we would park and changed.

We walked up the hill; this would be a down-only trip. A few pitches we would do by pull-through. When we reached the entrance I thought I'd rig it; I don't think I've rigged a pull-through before, and it was about time. The disadvantage was that it was very wet at the top of the pitch. No surprise the others were happy to have me do the work! And I made a big pile of spaghetti of the rope, but in the end I did make a fine pitch. And went down.

It was a nice little place; at least at this level. Not many ways to go. But nice! Soon I hit the second pitch. That one went down a nice inclined wet winze with colourful decoration. I was enjoying myself! And at the bottom of that pitch there was some wandering to do; several levels leading in all sorts of directions. And a nice traverse! I like traverses (not to be confused with rifts; I may be guilty of this crime on this blog) and I liked the scamper around. I even found a way out that seemed to normally be flooded. But we didn't go out that way; we could go down further, which we did.

Below it seemed to be even bigger. Tunnels leading everywhere! Phil scampered into one, which turned out to have a nice scramble up on offer. Nice! We didn't go all the way; not everyone was keen, and it looked a bit iffy. But good to know it's there! But then it was time to go out. 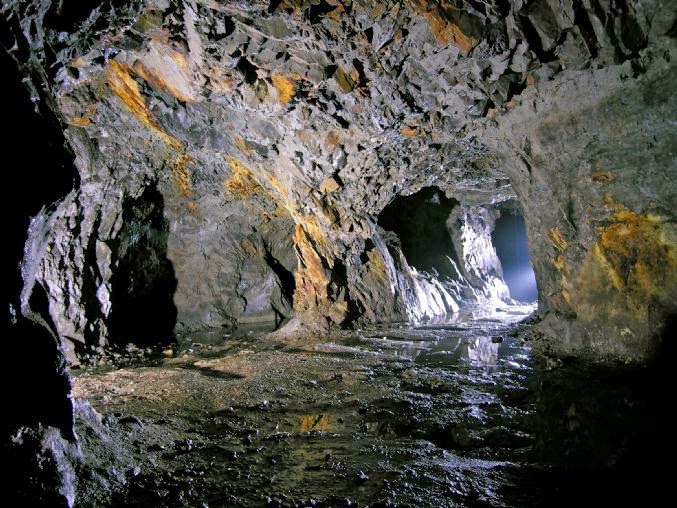 The bottom level. Pic, from an earlier trip, by Simon. 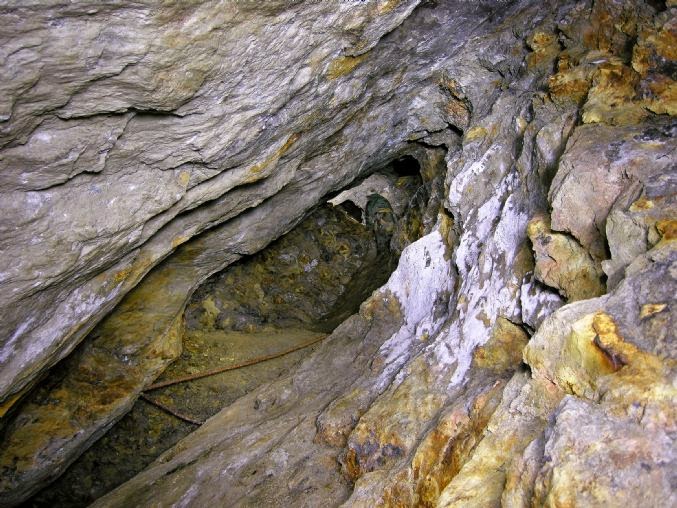 Someone climbing up where we had too. Pic by Simon.

Soon we stepped into the warm air. It was so mild for almost-November! Very nice. We changed, ate some cake (if there's Pingu there's cake) and then we were off. David had yet another field trip the next day, and for reasons of tide they would leave at 7AM. No rest for the wicked! But we didn't stay around for a quick pint, as that would be a bit too much of a good thing even for infamous night crawler Dave. And it was fine with me; I had already been knackered before we even started, and it was worse now!
Posted by Margot at 12:03