Everybody comes to North Wales. Or rather, all mine explorers come to North Wales! So I had already had several trips up this neck of the woods with the PCG, but now there would be a special one; with me being residential! I looked forward to it. With all my moving through the country I don't get to spend much time with people I've known for years. And Hugh would be coming too!

I had been worried about it; since teaching started, I had had to work every week evening except Thursday, and every weekend too, to keep up. I had only had spent one day not working at all, after the week with the field day, simply because I was utterly exhausted and the day was over by the time the necessary chores had been taken care of. Would I be able to take a day off for the PCG? Not everybody knows what academia is like, so not sure if people would understand if I wouldn't be able to afford to team up with them...

And then I finished the last lectures of this term. And I finished the first batch of marking I had to do! And I got to some 66% of the second batch. And for the first time, I felt like I had things under control. That was the Friday the PCG were already in town. So I was fine with spending my Saturday with them!

There was a bit of a complication; suddenly a request appeared from the organiser to be there 7.30. Half past bloody seven? The previous message had said 10AM! And I would travel with Hugh; he had to come all the way from Liverpool. It wouldn't be feasible for him to get there that early. And the whole situation frustrated me; even though I now felt alright about not working for an entire day, it didn't mean I had time to squander! And with trips leaving early I expected that the most exciting trips would have left before Hugh and I would be able to get there, and also, that all my friends would have already left. I knew there were quite some new members; before we'd know it we would have to do a boring trip with total strangers. Not very good! But I had been pessimistic. 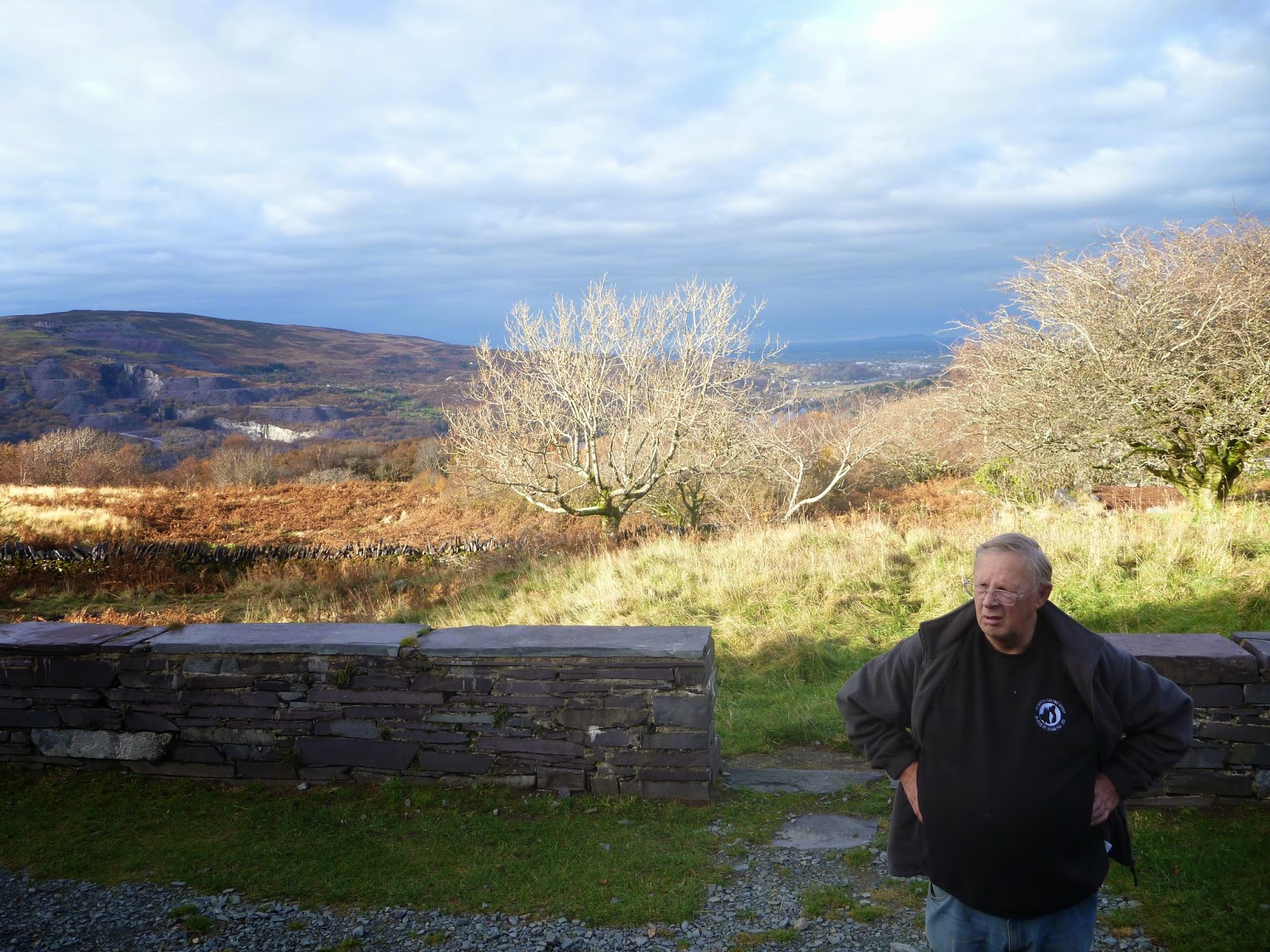 A picture from last year: Dave ignoring the beautiful view from the hut

We arrived, and found Dave, Dave and Dave still in the hut. Not all my friends were in Croesor! Soon a plan was made; I would take two new members, and Toby, a chap who'd already been there when I left, and Hugh down Parc. The trip I wanted to do involved SRT, but not very demanding SRT, so Hugh and Toby could practice and the new members get a taste for it. Good!

We set off and then I suddenly realised I had forgot my rope. Oh dear! But I knew the pitch was rigged. I had come up the old rope once; I knew it held. So we could still do it! I thought. We first went down the ladderway. All the men enjoyed the bit where you slide down the pipes! Of course. And then one of the new guys put the fixed rope through his descender. And tried to go down. But it wouldn't work; it was too thick, and wouldn't feed through. Oh dear! Now what? I had a figure of 8, but the men weren't comfortable with that mode of transport. After some deliberation we gave up. We had to go the other way! So we did. First up the pipes again, and then onwards. 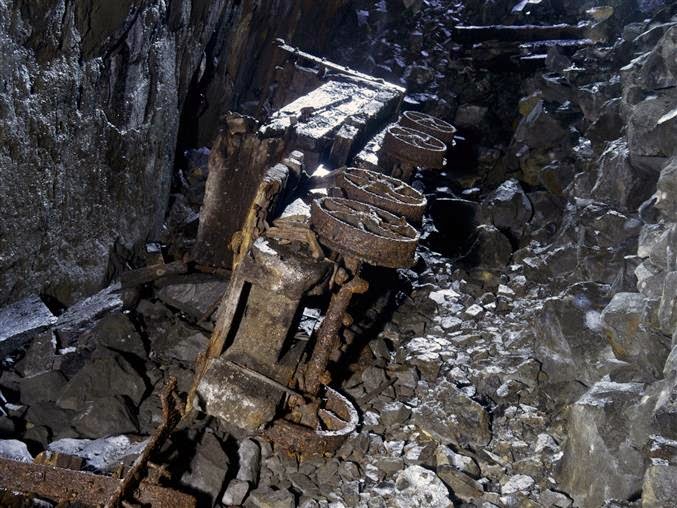 A nice wagon along the way. Pic by Simon (on a different trip)

Luckily Parc has much to offer. We decided to go see the flat rods. When we approached them, we found a huge group of mine explorers having their lunch. Oh dear again! And the last one was Linden, a chap who had come with the Thursday Nighters a few times. That was unexpected. We decided to go on a bit; some of the lunching group were reportedly still at the flat rods, and I didn't want to get in their way. 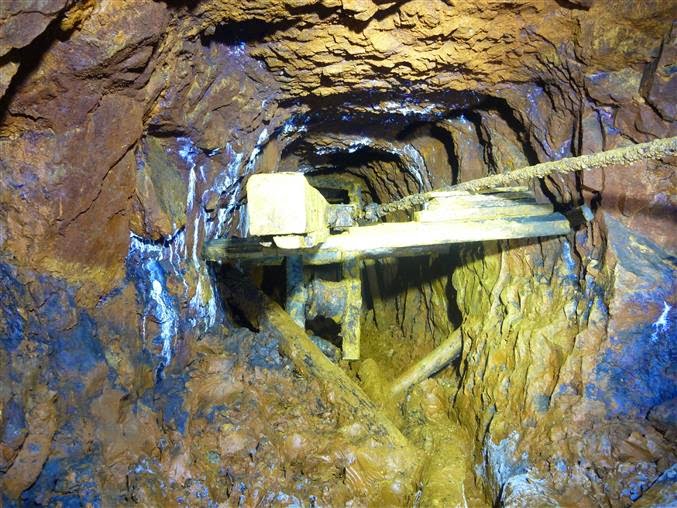 When we thought they'd surely be gone we went up. Too early! But we didn't get in each other's way. And after the flat rods we went out. It wasn't very late. But that was alright; we'd just have time for buckets of tea and strange cake made by one of the Daves before we'd go to the pub for a meal. Fine! And now we met Rick, who had been walking that day. Later the Croesor-Rhosydd through trip lot appeared too. Nice to see them! And we piled into as few cars as we could (everybody wanted a pint! Except the two tee-totallers, who had teasingly not brought their cars) and went to the Vaynol Arms in Pentir (not to be confused with the Vaynol Arms in Nant Peris) for some nice food. And some nice ale too! It was nice to dine with old friends and make new ones.

After the pub most went to bed. I applied a pair of earplugs and tried to have a good night. Worked fairly well! But the next day Hugh and I decided to not go underground. We had stuff to do! So we packed our stuff and hugged everybody. And it was a hassle to get away; the hut is hidden behind three locked gates and we had to wait for someone with a key to leave with us. That took forever! And only next month, the YCC will be in this neck of the woods too! It's good to live in Wales!
Posted by Margot at 19:19