Coming in from above

When the worst of the teaching was behind me, I decided I could take my weekends back; at least partially. So when the weekend after the PCG visit had a nice weather forecast I suggested to David to go and climb a hill or something. He did have time for some fun! But suggested to visit our pet mine instead. Well that's OK too. I managed to miss the good weather altogether by running in the cold, and working after the sun had come out, and then going underground later that afternoon, but hey ho.

When I had been on the boat, the others had dropped a shaft high up on the hill of our digging project, and David thought there might be a blocked passage to the levels further down. We hadn't got round to checking that out since, so he suggested we do that. And I was keen to have a look there!

We walked up the hill; David couldn't really remember what the best way was. Clearly, we took a different one from before; before we knew it, we suddenly stood in front of a big, beautiful, arched adit. Eh? We hadn't noticed that one before! But we decided to check out the shaft first, and this adit later.

We rigged the pitch, and I was the first to go down. It looked nice down there! While David came down too I had a little scamper around; it was a nice place, but all the tunnels ran dead rather soon. Oh well. We came to investigate a possible blockage! David pointed it out. It didn't look like a blocked passage to me. It rather looked like a nook they had used for storing some rubble. But nothing wrong with doing some shoving and prodding and finding out for sure.

After we'd cleared a foot or so of rubble it still looked like a nook with rubble. Still David wasn't convinced! But by the time we had removed half a metre from the entire nook he gave in. Or up. Fine; we had another adit to explore too! 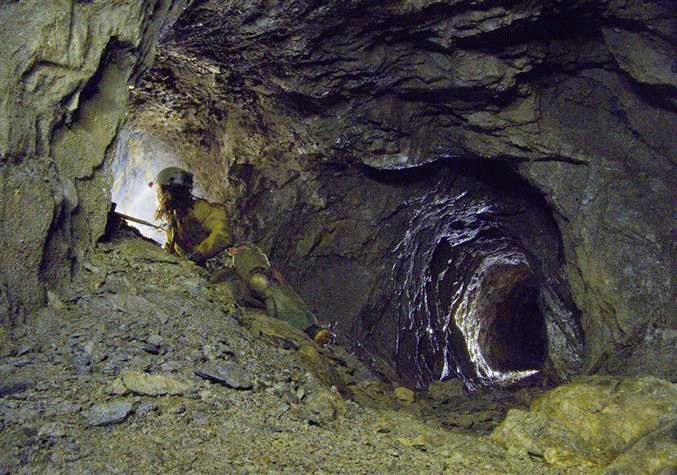 Me on the pile of rubble we had been shifting. Pic by David.

I first checked that a passage on the other side of the flooded shaft (it was flooded up to the level of the side passage we were in)  really was a dead end (potential for slapstick-style falling into the shaft not exploited) and then I started my way up. While I was climbing, David was sitting next to the water, getting kitted up; that was a mistake, as I accidentally kicked quite some rocks loose. Oh dear. But the adit we would explore next looked rather wet anyway!

While he was climbing up I just stared at the Milky Way. Not a bad way to spend an early Sunday evening! And when he was up too we derigged and went down. The lower adit provided knickers-deep water, but not very much else; it went dead after a few tens of metres. At least now we know! And it was time to go home anyway. But these two parts of the mine are now off the to do list! An afternoon well spent.
Posted by Margot at 12:56