It's one thing to be able to tell students something interesting about ice when they're out in the field. It's another to get them there, to have all the material needed and have it in the right place, to have parking permits and parking money and barrier passes and insurance and the answers to what the deadline is for the report and what the page limit is and when the sun will set and the tide will be high and whatnot. It's a lot of things to think about, and it all being the first time doesn't help! Only just before I told the students where they had to meet and what they had to bring and wear I found out we're supposed to pick the students up from the main campus. Not from SOS! Oh dear. Just in time. And the evening before I figured I might want to print the file that says what the students have to do. Otherwise I figured I'd be inundated by questions. So I spent the days before the field day not only doing my normal work but also scampering around, organising logistics and lunch, making sure we would have all the kit, and whatnot.

The day before the trip David came with me to Bangor to get the keys to the minibuses we'd use; they'd been delivered already. I took one bus to Menai Bridge, and loaded up the compulsory hardhats, a spade, and some trowels. And then I found the time to sit down and read up a bit on the topic; I like to know more than I need, so I can provide some background or elaborations if that comes in handy. And then I went home. I was tired!

The next morning I was in the office at 7:30. I printed the last things, made sure I had lists with the names of the students, their lunch wishes, aerial photographs of where we would go, an estimated timetable, information on tides and daylight hours, and enough pens and permanent markers to note anything that needed noting. And had a last coffee. And then I got an email from Jess, who would join as staff, that she was here. And so she was!

Suzie appeared too. We loaded up. And then David appeared. We were good to go! We drove to Bangor, where we already saw some students in lots of GoreTex hanging around near the main entrance. Good! And more and more showed up! Two were reported ill, but to my surprise everybody else showed up. So 9AM sharp we left!

We drove to the beach, where we all donned a hardhat and went to the cliff. A hat wouldn't save you from a collapsing cliff, but hey ho. And then I did my spiel! We were there to check the direction of the ice that had deposited the tills exposed in the cliff face. Had it come from the south? Straight from Snowdonia? All the students thought it would. And they set to work. 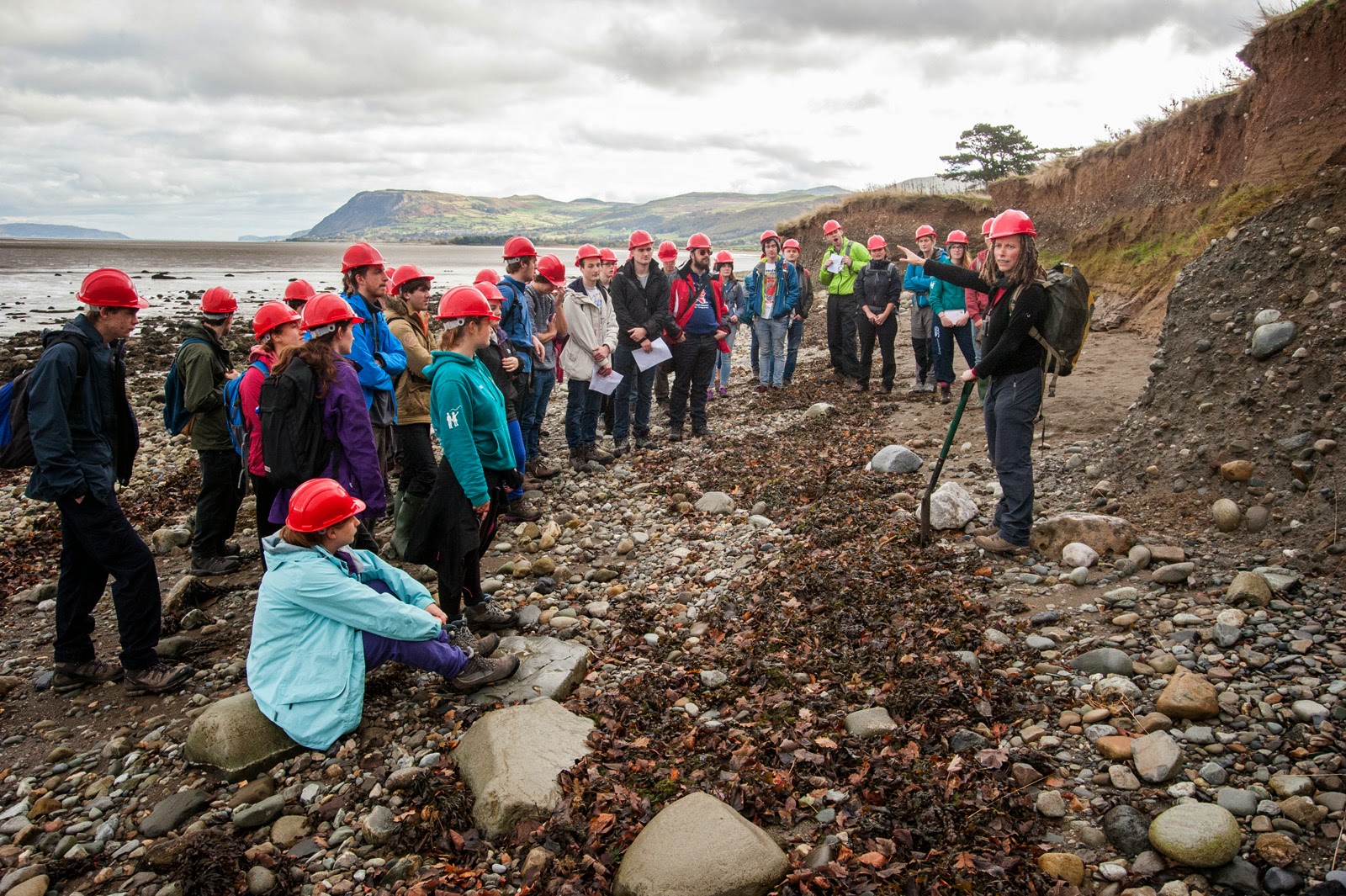 Me setting the students up for their measurements. Notice there is onlyone student yawning! Pic by David.

I had to pretty much show every student group again how you measure alignment and dip of a clast with a compass, but that was expected. And some students were measuring in a slump, and some seemed to only be picking clasts that showed what they wanted the answer to be, but well, one can't expect them to be flawless from the start. 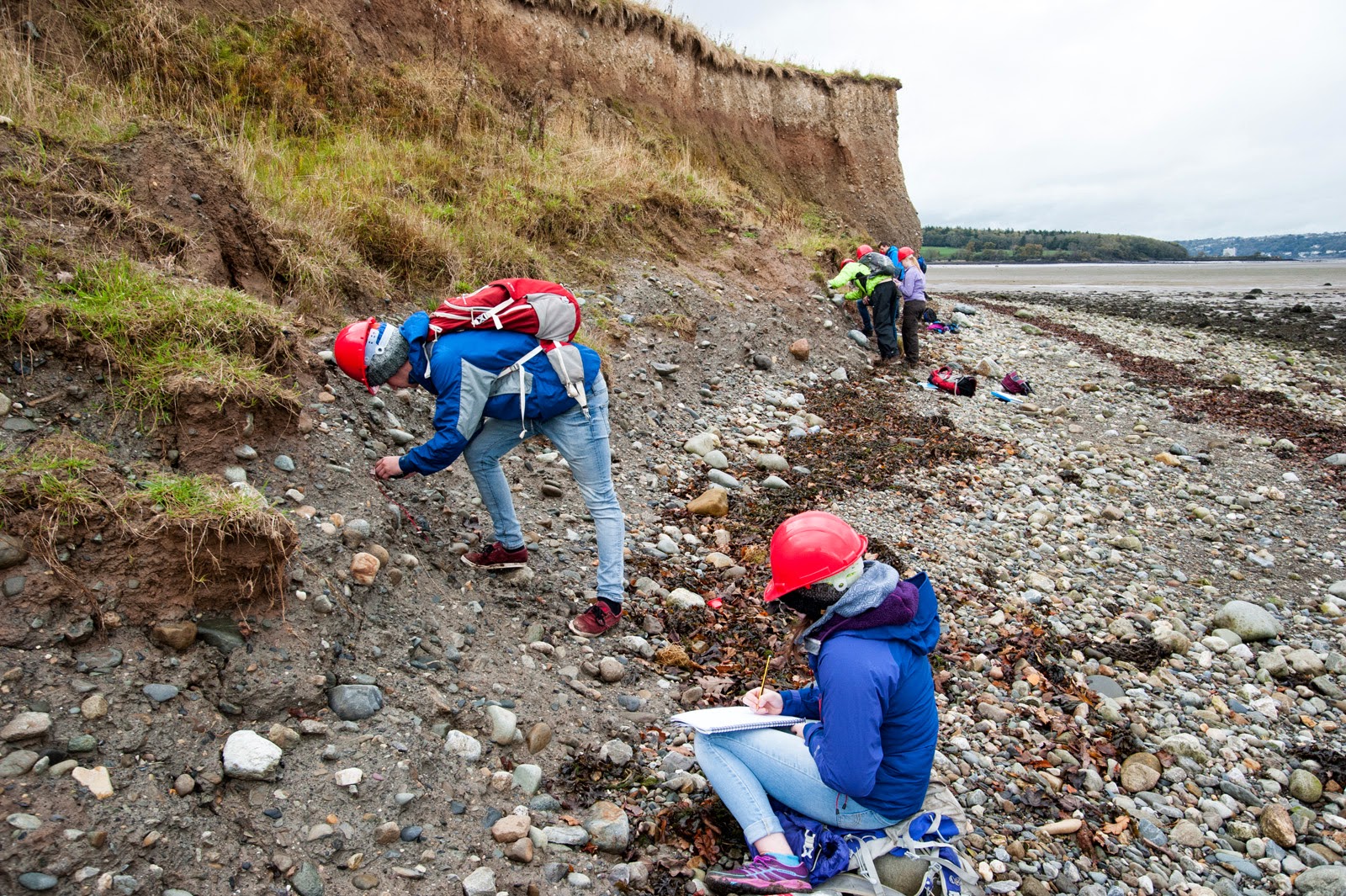 Measuring away (although these seem to be working on a slump; I did warn them!) Pic by David.

When I figured we should wrap up I gathered them all. Not all had done the required number of measurements, but we had another site to go to , and the sun would set at 16:49. We had to keep going! So I had them tell me what their results were. And they had managed to get results that support their hypothesis! I must say, I still believe the established theory that the ice had actually been diverted by the larger ice stream coming from Scotland, and was heading west, into the Celtic Sea. I'll see how they write this up! But I think they got the message that trying to make your data fit your hypothesis is not a very good idea. So I did another spiel in which I also pointed out the laminated sediments between the tills, and completed the story of the local ice, the proglacial lake, and then the ice coming from far NE overriding all of that. Rather evocative. I think! I hope they think so too...

Next stop was lunch. We drove to Llanberis, to Pete's Eats. We enjoyed a hearty lunch while the rain slammed down on the street. Snug! But not so promising for the second half of the trip. But when we got to Pen-y-Pass it was dry again. Splendid! We walked up to Llyn Llydaw. I did a spiel again. Here we were gathered to test the hypothesis that the glacial striations were made by a topography-constrained glacier. And this time they went with the data! And of course there was more to it than the hypothesis. This location has two sets of striations: one ~20.000 years old from the cold heart of the last ice age, and then another set, which has almost obliterated the former, which stems from ~12.000 years ago; the last hiccup of the last ice age. And they found them! The former striations pointed straight at a mountain ridge. The ice sheet then had been so thick it had just flowed over. Spectacular! But indeed, the later striations were caused by a more modest valley glacier. And upon that discovery we were done. We could go back down. Way before the sun set! I thought it had been a good day. And it wasn't even over yet! The rest of the day, though, I wouldn't be carrying much responsibility. Nice! 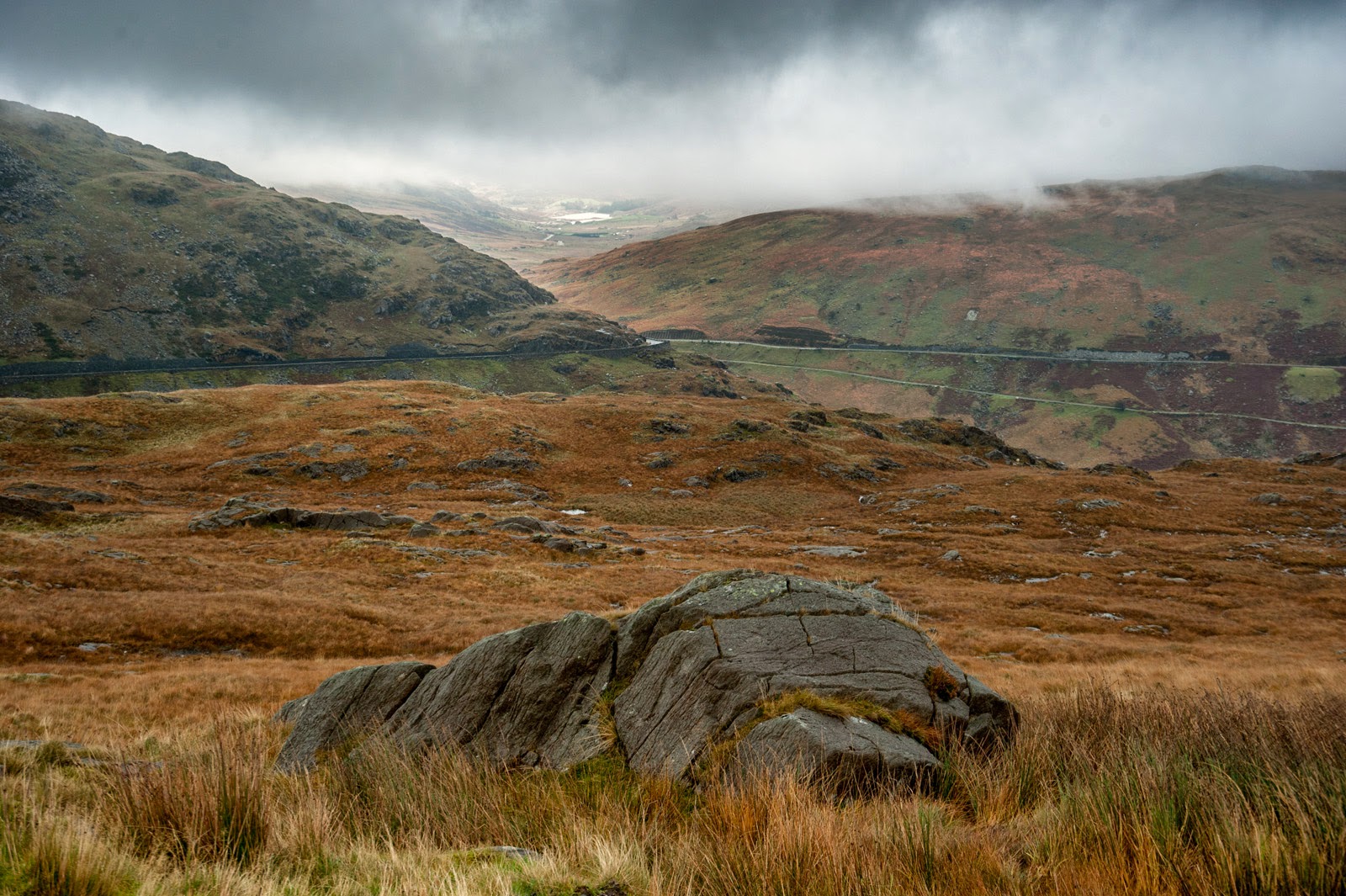 On the way to the next field site. Pic by David. 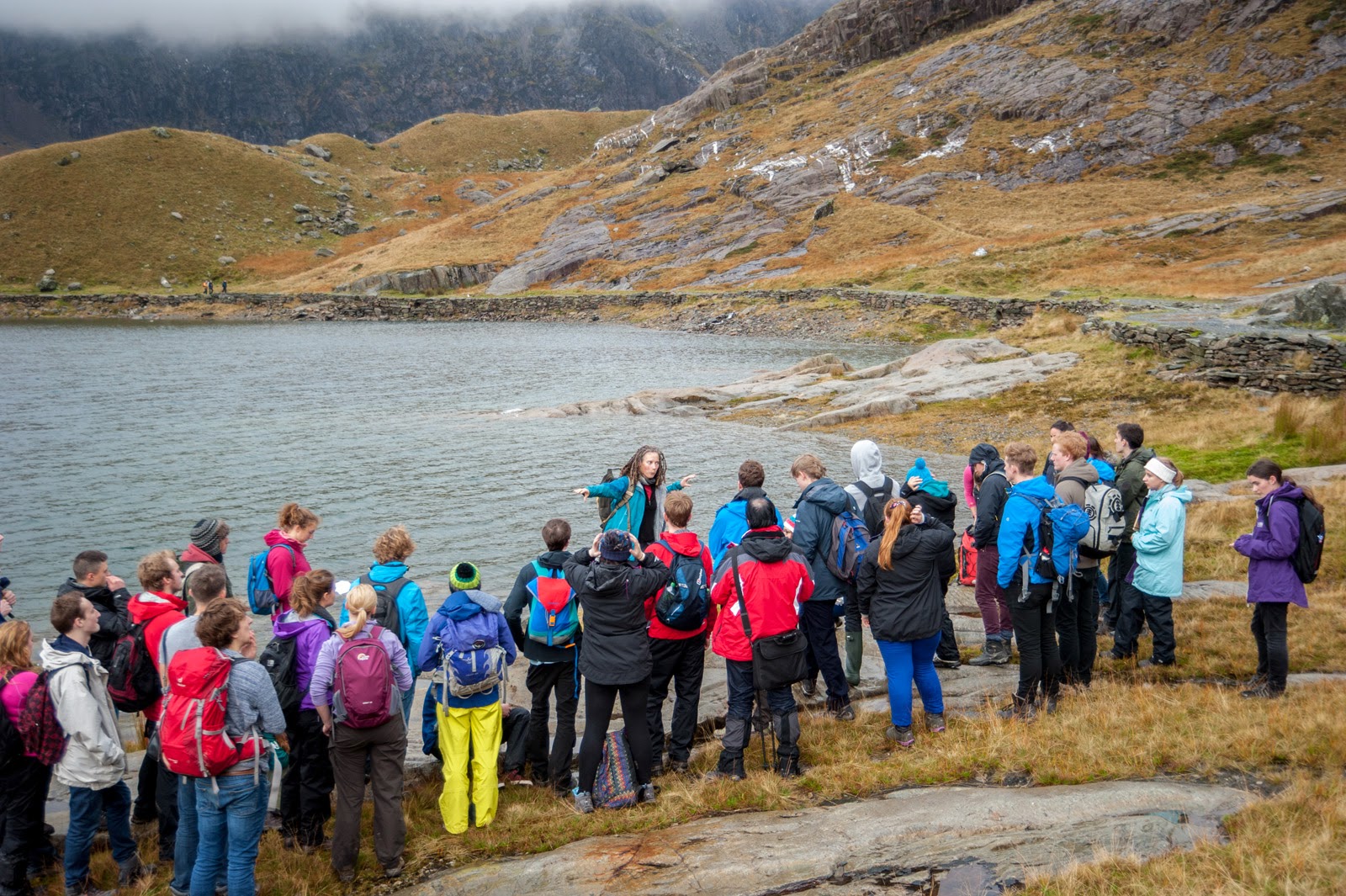 I seem to need wild gestures and facial expressions to get my message across. Pic by David. 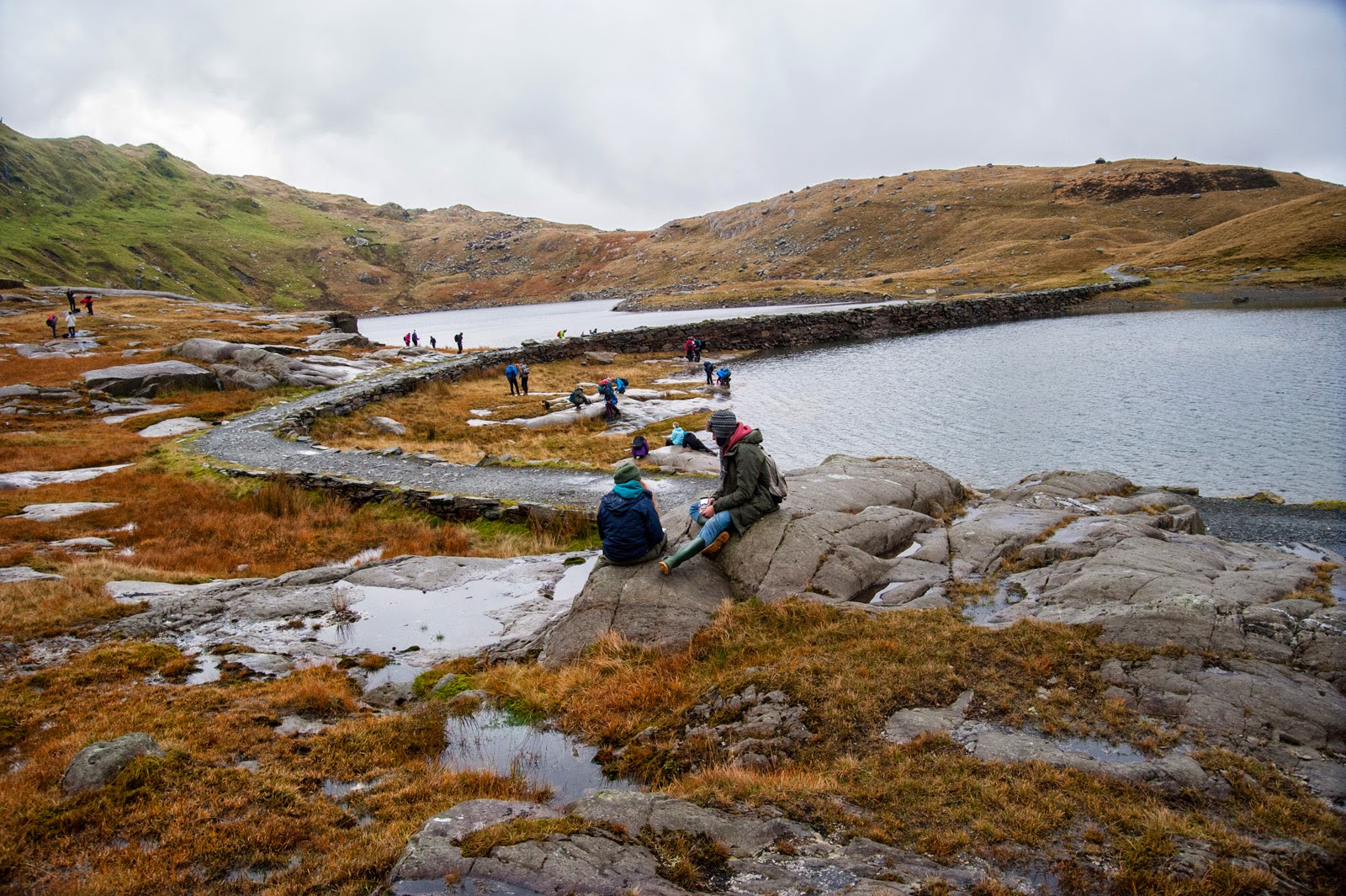 The students spread out, measuring striations, or already being done. Pic by David.
Posted by Margot at 16:02