To pierce or not to pierce

When I had my nose pierced at, I think, 21, they shoved a solid steel ring through it. Some years ago (I haven't found when exactly!) I decided the ring was a bit too ostentatious, and I switched to studs. Solid, steel studs. But my ladyfication progressed, and I decided to buy some more subtle jewellery. Subtle but still with a rather thick rod. I like to keep my options open! And then I lost a few, and bought a new set, but hadn't paid attention. These had slim rods. Now what? I decided to go for it. Since then, I've been wearing a very small modest stone in the valley of my nostril. I like changing the colour for special occasions, but had noticed you can't just take these out; the little ball at the end that keeps it in place is so much thicker than the rod! But then the stone fell out. So I knew I HAD to replace it! And well, once you're resigned, it's not so bad. I ripped it out. With bloody result. And had the replacement ready. That I didn't manage to get in! It seemed not to find the hole. I've had that before; sometimes a piercing takes a wrong turn and it can be a bloody job (literally!) to make it go the right way. And I knew I couldn't let it wait; that would just let the wound close.

Should I just leave it out? It's only a tiny hole these days; within no time it would probably be perfectly inconspicuous. Do I need a nose piercing? I was close to just doing without. But then I thought "wasn't I the kind of person to keep her options open? I can ditch the piercing any day! I can't decide to keep it any day. Now let's get that stud in!

I thought I might push something through from the other side; that often helps. But I didn't have a stud long enough for the purpose anymore. What to do? I decided to make a needle blunt, and use that. Easier said than done! I was rasping that poor needle over a fine file for ages before I deemed it blunt enough to be inserted into a bloody wound. And sticking it in from the top was easy. So easy I tried the stud, and indeed, it worked! So now I am a pierced woman again (even without taking my ears into consideration). Maybe some other day I'll prance around with an undecorated nose! 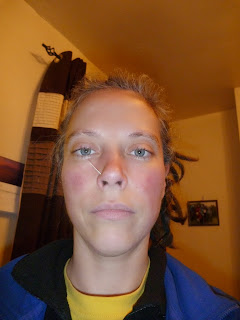