Last year I went north from Plymouth to celebrate New Year's Eve. And this year I decided to do the opposite! In 2011 and 2012, I had celebrated with in strongly overlapping companies, and it had been nice. Hence the decision to follow two of the revellers; Paul and Louise, who had moved to Staffordshire, north for the 2013 celebrations. But in the course of that year, I moved up while they moved down, so this time I travelled south to see not only them but also Pete and Sabrina, and Jon.

I found hospitality at Pete and Sabrina's, and wondered how long I should stay. On one hand I had lots to do and didn't want to overstay my welcome, and on the other hand, it is a six hour train ride and when you travel that far you want to get something out of it, and I hoped to see some other people too. I settled on 2.5 days. 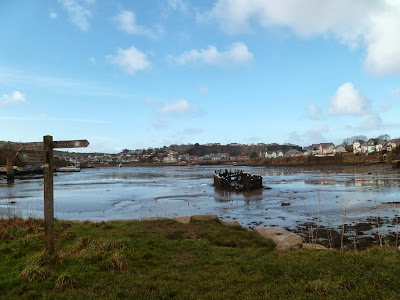 It was lovely to see Pete and Sabrina again! The day flew by. And then it was the 31st. A celebration was ad hocced; originally, Paul and Louise would host the festivities but their new house was not quite ready yet. So all were invited to Pete's. And we invited about twice as many as initially planned. The more the merrier! So in the end we had also Jon's friend John with girlfriend and stepson, and Simon the Historian. To my horror Pete kicked off celebrations with gym music (shudder!), but I must admit I warmed to it. When one of the tracks was "finally" by CeCe Peniston, which these days I strongly associate with the most enjoyable film "Priscilla, Queen of the Desert", I was won over. Go, Hugo Weaving! Shake that stuff.

Champagne flowed. Fireworks were watched. Banter was exchanged. Cabs were nowhere to be found. A classic New Year's Eve! And the next day I woke up rather fresh; I hadn't overdone it on the champagne. This allowed me to fully enjoy Lionel and Corinne dropping by. And later tea at Jon's. I failed to also visit Rupert and Dave, but I'll be back some time. And maybe I'll see them underground one day, in Nenthead for instance! And then it was time to go back north. Happy new year, all! I hope your year started as well as mine! 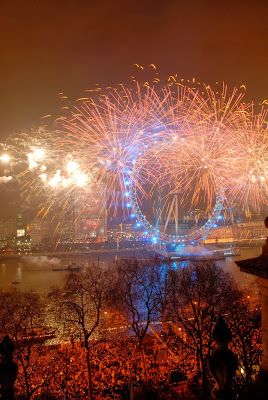