Beef with the KLM

I had booked a trip without cabin luggage. I can't remember why; maybe luggage simply wasn't offered. Maybe I had been scatter-brained. But it didn't matter; I could book extra bags on the KLM website, so I did. And checking in in York went effortlessly. No such luck in Amsterdam; the bag wasn't registered, and I had not printed a receipt. I paid for it again, and was assured by the chap I dealt with I could claim that money back if I could prove I had already paid. So optimistically I went home.

I went to the KLM website, to the "refund" page. When I entered the code from my receipt, an error message popped up: it said I could not claim refunds of that kind through that page, and I had to contact KLM otherwise. They don't give an email address, so I went to Facebook with my question. Where they tried to bluff themselves out of it. I sent them the initial receipt, and the receipt of my second payment, to which they boldly replied I had only paid for that bag one way and I was not owed any money. What? Nonsense. So I didn't buy into that. 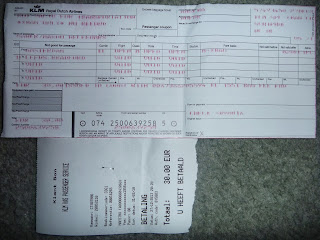 Some bickering later I had them admit they did bloody owe me that refund. And they sent me back to the refund site. Which says I cannot claim refunds of that kind through that page. Hurray, back to square one. They tried to blame me entering wrong information, but that myth was quickly dispelled as well. I was wondering: are they perhaps trying to flood you with hassle to such an extent that your time has been worth more than the money they owe you, so you'll give up? As with dealing with Plymouth University over the fried externals, it left a bad taste in my mouth. Next time I'll shroud myself top to toe in receipts. Apparently it's necessary!
Posted by Margot at 21:56