Into the open mine

We were keen! We would see things nobody had seen in many years. We had spent a weekend digging out a mine, and now the time had come to go and explore it. And it was already a beautiful evening before we got in.

While I was driving towards the venue, I thought I saw an arch of pale light in the sky, but I figured it was probably moonlight refracted in the dirt on my windscreen, or something. But when I got out of the car and into the windy emptiness flooded by moonlight, I saw it actually was a nightly rainbow. I had only seen one once before; when, on a summer hike, I had slept outside in the Alps, and a small rain shower had woken me up, and drawn my attention to this unusual phenomenon. And now, a big and majestic specimen stretched out over our heads like a good omen! I knew most people would never have seen a black-and-white rainbow, so I figured I'd point it out, for all to enjoy. The nearest person was Sparky, who was just getting into his caving kit. And it's not quite etiquette to approach a man who is temporarily only partially dressed, but I figured he would not mind once he found out why I was so shamelessly walking towards him. And indeed! He had been standing with his back to the rainbow, and was oblivious to it. As were the other cavers that popped out of cars. We admired the view. Maybe another 15-or-so years before I see the next one! 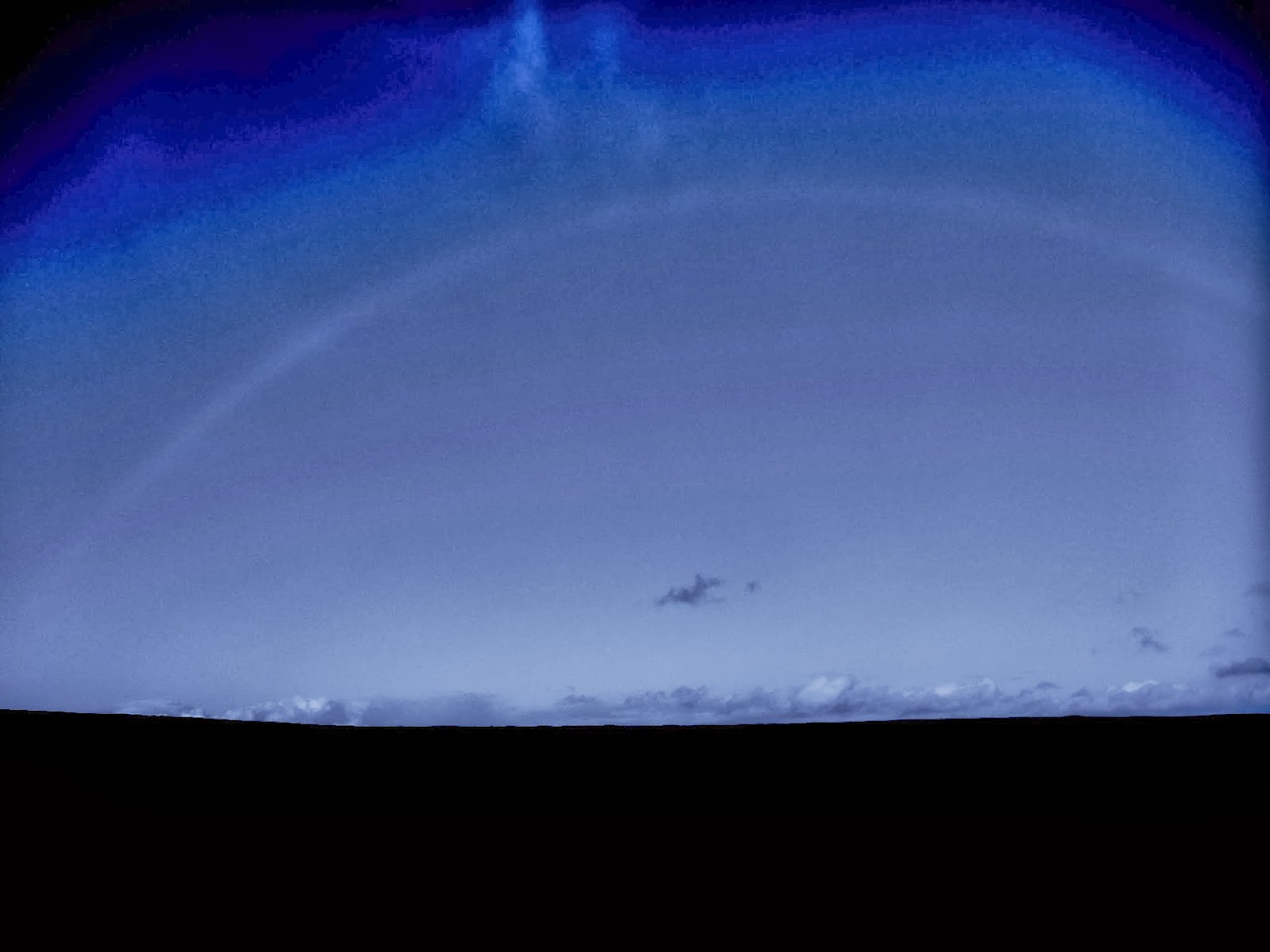 This is not our rainbow but a badly photoshopped solar specimen... I just didn't get my tripod out in time.

The rain stopped. It was time to get underground! We walked through the drainage adit to the actual mine. It was amazingly beautiful! But a LOT of ochre had accumulated on the level floors. When we saw we were dislodging more than was a good idea we turned back. With pain in our hearts! You don't want to leave half a mine unexplored, but then again, if your explorations release too much mine waste into a stream, you'll never again get permission to dig out another underground venue. We took pictures on the way back; it was very beautiful. I needed many men to light my way, though; the place was too big to be lit by my modest headlight, even at 30 second exposure times.

After we had gotten out we discussed the options. What were we to do? Not go back? But there was a whole ochre lake in there - surely it was worth maintaining access so people could periodically check the state it was in? If that would burst, the stream the mine drained into, would be Campbell's soup. Could we perhaps put in a traverse line? Build a boardwalk? A via ferrata? A monorail? The ideas got weirder and weirder. The last word isn't said on the matter. But I'm glad I caught at least a glimpse of this amazing place! A few days later we gated it, so now we can ponder our options without having to worry too much about other people getting in and getting up to no good. And we'll see what the future of this mine will be...