Before I left home I went through the  list in my head. Helmet: check. Belt: check. Gloves: check. Knee pads: check. And so on. I thought I had gone through everything.

Driving up the A38 I suddenly realised I hadn't gone through the entire list. I had forgotten my long johns! Oh no. Now what? I was wearing my quick-dry zip-off trousers. Should I wear these underground? But then I would perhaps get all wet and muddy, and have to go to the pub like that! And drive home all drenched! But  the other option was: being underground in a chafing boiler suit, with no padding or thermal insulation. And what is more important: being comfortable underground or above ground? Underground, of course! So I kept my trousers on. 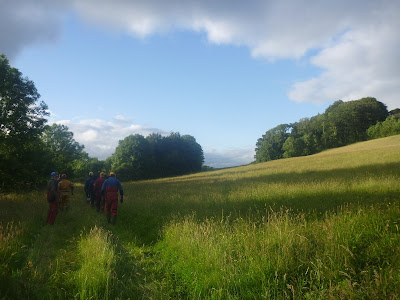 Walking to Bunker's under a surprisingly blue sky

We first went into Bunker's cave. I had volunteered to become a leader for trips into that place, but first I wanted to be certain I knew the way. So I had seen its undeniable beauty before, but that was beside the point. I am now sure I can take people there! And the damage to the trouser situation was limited. Bunker's isn't very wet.

We didn't linger. There was more to see in the surroundings! So we extracted ourselves from this rather tight place, and went deeper into the woods, where there seemed to be a mine that had cut through a cave, resulting in some interesting cave/mine hybrid. Lionel managed to find it, and after clearing the entrance he slid in. He immediately shouted something about it being very wet. Oh dear...

I decided this was why I had come here. I slid in too. By that time Lionel was already up to his sensitive parts in the water; he made the sounds that tend to accompany such activity. It WAS deep! And it was cold! But it was rather pretty too. We waded to the end of both tunnels we found; one ends in a small cavern where there is a way up, but it's tricky. We decided against it. And came out again. 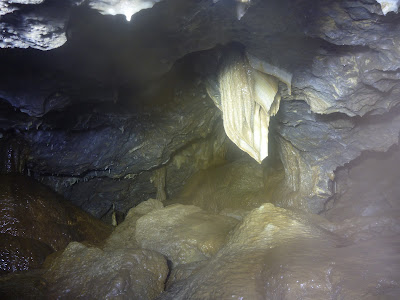 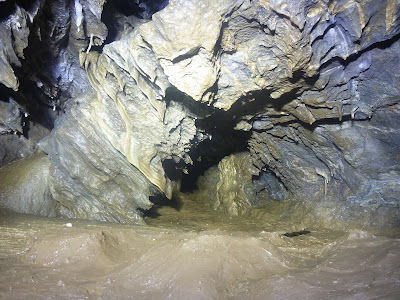 Two pictures from Bunker's; uncharacteristically, without aragonite crystals in them!

We had seen a hole in the hillside a bit higher up too: would these two holes connect? It was worth the try! So we crawled into the other hole too. This one, being higher, wasn't anywhere near as wet, but it was several times muddier. I was wondering if they would let me into the pub afterwards.

We established that, indeed, the the places connect, and on that note we decided it was beer O'clock and went back. The path lead past a rapid stream; I decided that was where I might get some of my social acceptability back. So I stepped into the water, started with taking one knee pad off, and holding it in the water. The whole stream immediately turned dark red. Oh dear. I would have to give myself a very rigorous clean before I could even contemplate the pub.

I washed off all my kit (that took a while!), and wrung my trousers out the best I could. They were still quite wet! But I decided to try the pub anyway. These trousers are black, and it isn't very conspicuous if they're wet. So I changed shirt and shoes and just walked in. Nobody noticed! So I enjoyed my pint. By the time I got home the trousers were almost dry. They let you get away with behaviour that's generally frowned upon! I'll keep them...
Posted by Margot at 09:08